Order in the Chaos 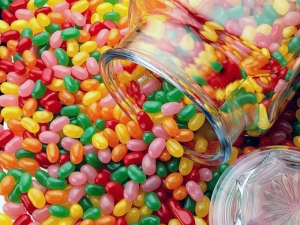 It’s a crazy world, right? Where things happen without rhyme nor reason.

This week I watched a documentary on TV called The Code. It’s a science programme. Science really isn’t my thing. But this episode was about order in the universe, a concept that has always fascinated me. Specifically, the show explored the theory that there is a series of patterns and values underpinning everything around us.

I just don’t know what.

I do know there is some kind of order in the chaos. You just have to look for it. If you look hard enough, the signs are there.

And so, to the Code…

One experiment outlined in the documentary was designed to show what they called the ‘wisdom of the crowd.’

Researchers asked 160 people to guess how many jelly beans were in a glass jar. We all know how difficult a task this is.

Obviously the estimates varied wildly, from as low as 400 to as much as 50,000. The actual number of jelly beans contained in the jar was 5,110, which nobody correctly guessed. Nobody was even close.

The researchers added up all the incorrect guesses they received, all those 400’s and 50,000’s. Then they divided the total by the amount of people participating. So… total number of every estimate combined, divided by 160.

Using this method they arrived at a mean average answer of 5,115. That is less than 1% away from the actual number of 5,110.

NB: I didn’t record the documentary or take notes, I wrote this from memory the next day, so forgive me if there are inaccuracies. I’m pretty sure I have most of the main facts, though!

I write stuff. Pretty much any stuff. My fiction and non-fiction has appeared in over a hundred publications worldwide and my books have been both traditionally and independently published. My first book, Into the Dragon's Lair – A Supernatural History of Wales was published back in 2003, and I've worked extensively in the freelance journalism industry, contributing features to numerous international publications including Fortean Times, Bizarre, Urban Ink, Loaded, Record Collector, Maxim, and a regular column to the Western Mail newspaper. I lived in China for over nine years where I taught English at universities in Beijing, Changsha and Guangzhou during my search for enlightenment, before moving back to the UK in January 2013 to work as staff writer on Nuts magazine. Later, I was senior writer on Forever Sports magazine, associate editor at a shortlived title called Coach, and I currently write business news for a trade magazine about the plastics industry. It's far more satisfying than it sounds. My latest fiction releases have been Human Waste (on Deviant Dolls Publications) and X5, my fifth collection of short fiction. I also edit, proofread, ghost write, and drink far too much craft beer. END_OF_DOCUMENT_TOKEN_TO_BE_REPLACED
This entry was posted on Tuesday, August 7th, 2012 at 3:11 am and tagged with chaos, destiny, math, order, theory, universe and posted in Uncategorized. You can follow any responses to this entry through the RSS 2.0 feed.
« First review of Devil’s Island!
The Worst Month Ever »

2 responses to “Order in the Chaos”