My new novel, Rainbow’s End, is out now on FlareFont publishing and is available on Amazon, Smashwords, B & N, and all other online retailers. 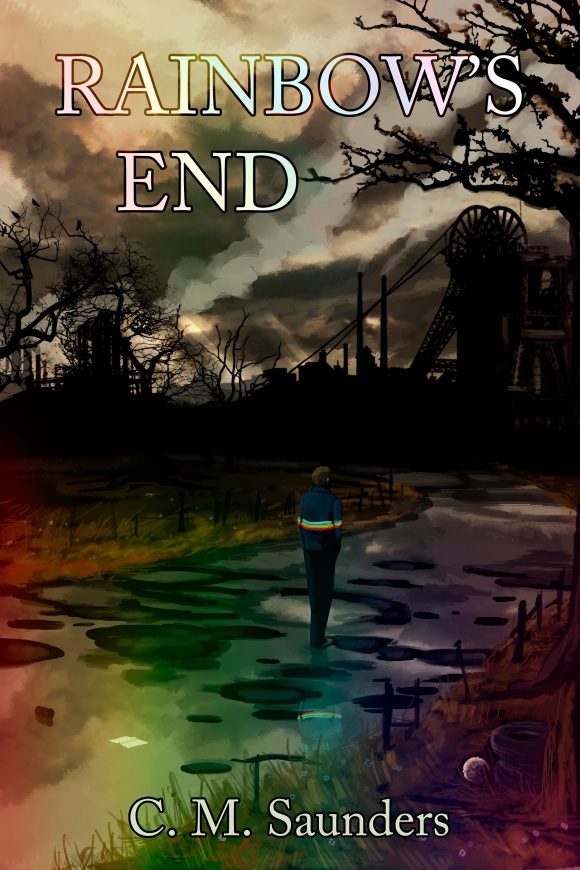 This is my first attempt at a grown-up novel, with no ghosts, zombies, serial killers, demons, aliens or anyfink…

And I just know it’s going to get me in trouble.

Life is a journey, right? We all make our way from A to B to C.

This is my journey. At least, part of it. I made some of it up for dramatic effect.

In a nutshell it is the story of a young man who leaves rural Wales in search of gainful employment, adventure, and enlightenment. In short, the pot of gold at the end of the rainbow.

However, on his journey of self-discovery, he gets far more than he ever bargained for…

Rainbow’s End, written in first-person narrative style, is primarily a contemporary cultural and social study. Its underlying themes include national identity and the perennial search for ‘belonging’, and asks where Wales fits into the modern world.

The story begins as a bleak assessment of modern life in the South Wales valleys. The lead character has worked in the same local factory ‘putting things in boxes’ for eight years; he is bored in his long-term relationship and yearns for the freedom to explore, both literally and figuratively. A trip abroad stirs an awakening of sorts, and on his return to the confines of work the narrator begins a torrid affair with a colleague. This quickly turns sour; he feels isolated and restricted, and only does the things he needs to do, as opposed to the things he wants to do. As the relationship, and his life, crumbles around him he turns to writing as a means of self-expression.

Before too long his writing exploits make him a focal point of attention in the village where he lives, but this success is tempered by the worsening condition of his relationship. Eventually, after a run-in with the local police, he is forced to flee to Southampton, where he wins a place on a media course at university. At last, he is free to indulge both his fascination with writing and his wanderlust, as he finally breaks free of the chains that had bound him for most of his life. Belatedly, he realizes that life can be whatever you make it.

The blinkers have finally been removed.

However, in Southampton he discovers that the grass is not always greener, as he is targeted by bigoted racists who see him as a ‘foreigner.’ There are also problems when he returns to his hometown and his small group of lifelong friends reject him because of his perceived act of disloyalty in moving to England.

Disillusioned and perpetually luckless in love, he eventually decides to start a new life in Beijing, throwing himself headlong into the search for adventure, enlightenment, and ultimately…

I write stuff. Pretty much any stuff. My fiction and non-fiction has appeared in over a hundred publications worldwide and my books have been both traditionally and independently published. My first book, Into the Dragon's Lair – A Supernatural History of Wales was published back in 2003, and I've worked extensively in the freelance journalism industry, contributing features to numerous international publications including Fortean Times, Bizarre, Urban Ink, Loaded, Record Collector, Maxim, and a regular column to the Western Mail newspaper. I lived in China for over nine years where I taught English at universities in Beijing, Changsha and Guangzhou during my search for enlightenment, before moving back to the UK in January 2013 to work as staff writer on Nuts magazine. Later, I was senior writer on Forever Sports magazine, associate editor at a shortlived title called Coach, and I currently write business news for a trade magazine about the plastics industry. It's far more satisfying than it sounds. My latest fiction releases have been Human Waste (on Deviant Dolls Publications) and X5, my fifth collection of short fiction. I also edit, proofread, ghost write, and drink far too much craft beer. END_OF_DOCUMENT_TOKEN_TO_BE_REPLACED
This entry was posted on Friday, December 28th, 2012 at 9:35 am and tagged with adventure, books, China, coming-of-age, fiction, identity, novel, romance, teaching, wales, writing and posted in Books. You can follow any responses to this entry through the RSS 2.0 feed.
« Christmas in China
Gore magazine »