Hopefully, if you run a free promotion on KDP and promoted it properly, you will have benefited from a few hundred, or even a few thousand downloads depending on how much marketing you do. Incidentally, you can track exactly how many copies are being downloaded , and in which territory, in the ‘Reports’ section of your account. This is an invaluable tool because as you progress through your marketing campaign it allows you to instantly see which strategies are working for you and which ones are not. There are some general rules that it’s worth applying; probably the main one being that most people have more leisure time on weekends and are more likely to download your book, so when utilising KDP promotions, make sure the promo runs over Saturday and Sunday.

That’s one way of looking at it.

But obviously, most of the people who downloaded my book for free probably wouldn’t have forked out actual money for it, anyway. So the other way of looking at it is that I gained 904 new readers.

I’m not stupid enough to think that every one of those 904 will get around to reading my book. First and foremost, I am a reader. I download a lot of free books to my Kindle, a lot of which I never actually read. I am assuming most people do this. There are a lot of free books out there. Making a rough estimate based on my own reading habits, I imagine around half of that 904 will never open my book. Still, looking on the bright side, that leaves 452 who might!

From here on out, bar the occasional other promo I do, every book I sell makes money. That should be all the incentive you need. Now, it’s time to go to work and step up your promotion efforts. You can’t force people to buy your book. And begging is just embarrassing. In the most basic terms, you have to get your book in front of people who might like it and persuade them that they need to buy it.

It helps no end if you have a good, concise, well thought-out blurb, or product description. Make it exciting. Check out the blurbs on top-selling titles in your genre for some tips, taking note of what kind of words they use. This may not work for every book, but soon after I put out my latest release, X: A Collection of Horror, I revised the product description to include the following:

At first, I just wanted some kind of safeguard in case I started getting emails from angry parents of kids who had downloaded it. The strange thing is, after I inserted the warning, there was a mini-spike in sales. Then I started thinking, what happened back in the 1980’s when the PMRC made record companies put parental advisory labels on record sleeves? That’s right, sales went through the roof. I don’t pretend to know why, I’m not a psychologist, but I can tell you that after that, I left the warning there!

The media industry may be in flux, but there are more markets, and more ways to access these markets, than there ever has been before. The sheer number of websites, blogs, magazines, fanzines, newspapers, radio and TV stations, is bewildering, but the one thing they all have in common is that they all need content. You can provide that content for them, either by way of giving interviews or simply sending out review copies of your book. Don’t forget to tell your local newspaper. They love local-boy-does-good stories, and so do readers. However, don’t expect to command a fee. You aren’t Dan Brown or Stephen King. Just be grateful with the column inches and hope they translate to sales.

Try to get a handle on things and focus your efforts. I made up a list of blogs, websites and publications that may be interested in promoting my book either directly or indirectly, then contact them systematically. If you can count some fellow writers amongst your friends, offer to do a guest blog for them. In this manner, you can even organize virtual blog tours. Within the first couple of weeks X: A Collection of Horror was on sale, I managed to secure publicity interviews with:

None of the above are massive sites, but every bit of exposure helps build your platform, increase your profile, and boost your internet search rank.

My first indie offering, X: A Collection of Horror, is out now:

Adventures in Indie Publishing: Part 3, focusing on promotion and social networking can be found here:

Part 2, covering advice on editing, cover art and priming the market, can be found here:

Part 1, featuring an overview of the industry and an introduction to Kindle Direct Publishing, can be found here:

They were cheesy and full of bright colours, big hair and even bigger shoulder pads, but the 80’s were a seminal decade for movies. I know there are some notables that haven’t made the cut, but I can’t include everything. That is the nature of lists. They start and they end. Kinda like films.

If you want to nominate your own, you can do so in the comments. And if feel that strongly about it, make your own list. So, in no particular order, here is my list of the Greatest 80s Movies EVER!

Our hero John Rambo (Sylvester Stallone) gets sprung from jail and sent back to ‘Nam, where he falls in love, takes on a Vietcong army on his own (and wins), but not before getting captured, escaping, releasing a bunch of American POWs, nicking a gunship, and flying it back to a US camp in Thailand to take revenge on the evil pen-pushers that betrayed him. All in a day’s work.

Fun fact: the entire film was actually shot in Mexico. 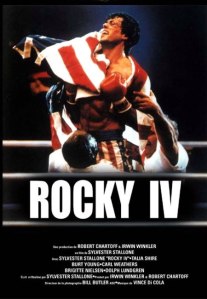 Only with the benefit of hindsight can you see Rocky IV as the blatant cold war propaganda it was with the callous, cheating Ruskie versus the honest, down-to-earth, all-American hero. Even for an 80’s actioner, Apollo Creed’s death scene is one of the most brutal and harrowing ever committed to celluloid, made even more powerful by all that glitter.

Fun fact: For added effect, Stallone decided he and Dolph Ludgren, who played Ivan Drago, should exchange punches for real when filming the films climactic fight scenes. He changed his mind after Lundgren hit him so hard in the chest his heart swelled up and he had a stint in intensive care. Oops.

One of the darker entries on this list sees Robert Downey Jr steal the show as Julian in pre-American Psycho Bret Easton-Ellis’ realisation and destruction of the American dream.

Fun fact: Easton-Ellis has written a sequel called Imperial Bedrooms, in which he claims all the characters are alive and well in the present day. That must have taken some doing, as Julian dies in the end of the first one.

Fun fact: Who else thought Andie should have ended up with Duckie? That would have made total sense. So thought writer John Hughes, and the original ending was filmed that way. But test audiences disapproved, and the ending was re-made.

How could a film about a bunch of kids stuck detention possibly work? Nobody knows, but it does. Helped no end by the classic theme song, Don’t You Forget About Me by Simple Minds, teen angst never looked so cool. This is the archetypal Brat Pack film.

Fun fact: John Hughes made the Breakfast Club on a shoestring budget of $1 million. It went on to gross over fifty times that amount worldwide in cinemas alone.

Wax on, wax off. Who knew being treated like a slave could turn you into a double hard bastard? Another classic underdog movie from John G. Avildsen, director of Rocky. Hands up if after watching this film you subsequently tried taking somebody out with a crane kick, only to fall flat on your ass in the middle of the playground.

Fun fact: Noriyuki ‘Pat’ Morita was nominated for an Oscar as Best Supporting Actor in his role as Mr Miyagi. He lost out to some dude who was in the Killing Fields.

The first and by far the best in the BTTF trilogy. Written and directed by Robert Zemeckis, produced by Steven Spielberg and starring Michael J Fox in his pomp, this entry had star quality sprinkled all over it. And so it proved when it raked in over $383 million at the Box Office, becoming the biggest movie of the year in the process.

Fun fact: When filming started Fox was busy making Family Ties, so the makers decided to cast Eric Stolz as Marty McFly instead. Four weeks and $3 million later, all agreed the move was an epic failure, even Stolz. From then on a schedule was devised whereby Fox would work on Family Ties during the day and BTTF at night. 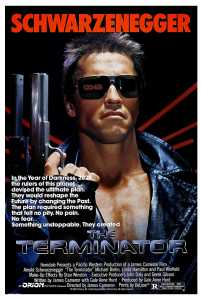 Arnie at his irrepressible best. As wooden and unemotional as its possible to get, just what a machine from the future should be like. The idea for the film came to writer/director James Cameron when he was taken ill in Rome after the release of Piranha II, and he dreamed about a mechanical torso dragging itself from the wreckage of an explosion. His agent hated the idea, and told Cameron to work on something else instead. Cameron fired him.

Fun fact: The studio originally wanted to cast O.J. Simpson as the Terminator, and Schwarzenegger as Reese. This plan fell through because Cameron thought Simpson wasn’t believable enough as a killer. Um, right.

This isn’t so much a sequel, as a whole new direction for the Alien franchise. Ridley Scott made the first one, and James Cameron was drafted in for the follow-up, which must surely qualify as one of the best action movies of all time. Watch the Special Edition. It kicks all kinds of extra ass.

Fun fact: Though filmed entirely at Pinewood Studios, England, Cameron wanted only actors who could accurately imitate American accents. As a result, over 3000 auditions by British actors were binned and American actors cast in their places, including three from The Terminator (Michael Biehn, Lance Henriksen and Bill Paxton)

Sleep all day, party all night. It’s fun being a vampire. Everything about the Lost Boys is just cool from the loaded soundtrack to the witty one-liners and slick production. As an added bonus, Jami Gertz is smoking hot throughout. One of the few films to actually make you want to be a supernatural entity.

Fun fact: The Frog brothers, Edgar and Allen, were named after the writer Edgar Allen Poe, and the reason Kiefer Sutherland doesn’t explode in the end like the other vamps is that he didn’t really die. This was to be addressed in a sequel called Lost Girls, which never got made.