An Ode to the Old Arms Park 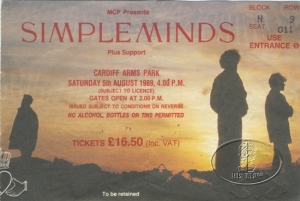 I’d been a Simple Minds fan since 1986, when my cousin Linden turned me on to them. Once upon a Time was one of the first albums I ever bought as a 12-year old, and I loved Live in the City of Light. Therefore, when tickets for the Street Fighting Years tour went on sale I couldn’t wait to get my hands on one. It was the first gig I ever went to, and I still remember the buzz as the excitement built in the weeks leading up to the gig, and then during the day. The support bands were the Darling Buds, the Silencers and Texas (not the Pixies, as some sources state), an early highlight being Sharleen Spiteri calling us a ‘load of Welsh b*stards’ and storming off in a huff because, in truth, nobody was there to see her band and didn’t pay them any attention. There may have been a few projectiles in the form of little plastic bottles aimed at the stage. For me and the 56,000 others, it was all about the Minds.

I wasn’t such a big fan of the Street Fighting Years album, though in time the title track and Belfast Child went on to become two of my favourite Simple Minds songs. I was more into the stadium rock sound that preceded it. Important and relevant it may have been, but being so young, a lot of the political stuff about Apartheid and Nelson Mandela went over my head.

Musically, the Cardiff gig wasn’t perfect. The set was too heavily reliant on the newer, slow-paced material and, as far as I can remember, they played virtually nothing pre-Sparkle in the Rain. Until recently, the band has tried desperately to distance themselves from those early art-rock outpourings, and it is more than a little ironic that today those tunes sound a lot fresher than some of the albums they put out in their pomp. Jim Kerr has always been a fantastic frontman (“Lemme see yer hands!”) and even back then I could appreciate the relationship he formed with the crowd and the sheer effort he and his bandmates put in. 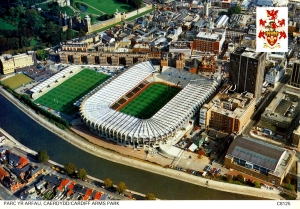 Now, more than 25-years on, Simple Minds are still recording and touring. They endured some difficult times during the late 90’s and early noughties when they declined in popularity and lost major label backing, but in the past couple of years have experienced a renaissance and are back playing arenas again, if not stadiums. Paradoxically, they have returned to the style of their first few albums and tracks from that period feature prominently in their setlists, usually at the expense of material from the Street Fighting Years (1989) and Real Life (1991) albums. Last year they put out Big Music, their most acclaimed album in years, which pays more than a passing nod to their roots. They seem to be enjoying their Indian summer, which is good to see.

Despite being renowned as a rugby union stadium, a fact acknowledged from the stage by Jim Kerr that day, during this era Cardiff Arms Park (aka the National Stadium) attained a pretty good pedigree in attracting world famous recording artists. Michael Jackson had performed there the year before, and over the years it also played host to the Stones, David Bowie, U2, Dire Straits and REM, to name but a few during its tenure as Wales’ biggest and best music venue. Summer gigs there became a bit of a tradition among people of a certain age. The last act to put on a show there before the venue was demolished to make way for the Millennium stadium was Tina Turner in 1996. Bands still come to play at the Millennium Stadium, but it just doesn’t have the same allure as the old Arms Park, which has surely earned it’s place in the rich tapestry of Welsh culture.

I write stuff. Pretty much any stuff. My fiction and non-fiction has appeared in over a hundred publications worldwide and I have written over a dozen books which have been both traditionally and independently published. My first book, Into the Dragon's Lair – A Supernatural History of Wales was published back in 2003, and I've worked extensively in the freelance journalism industry, contributing features to numerous international publications including Fortean Times, Bizarre, Urban Ink, Loaded, Record Collector, Maxim, and a regular column to the Western Mail newspaper. I lived in China for over five years where I taught English during my search for enlightenment, before moving back to the UK in January 2013 to work as staff writer on Nuts magazine. Later, I was senior writer on Forever Sports magazine and associate editor at Coach magazine, before leaving to chance my arm in the world of pro freelance. In recent times I've devoted more time to dark fiction, my latest releases being Human Waste (Deviant Dolls Publications), Tethered (Terror Tract Publishing) and X4, my fourth anthology of short fiction. I also edit, copy write, proofread and ghost write, and drink far too much craft beer. END_OF_DOCUMENT_TOKEN_TO_BE_REPLACED
This entry was posted on Saturday, August 15th, 2015 at 6:36 pm and tagged with 1989, Arms park, Cardiff, concert, gig, music, rock, simple minds, stadium, wales and posted in Blogging, concerts, History, Life, music, National Identity, Wales. You can follow any responses to this entry through the RSS 2.0 feed.
« Summer Story
How to Have the Perfect Bank Holiday »

6 responses to “An Ode to the Old Arms Park”