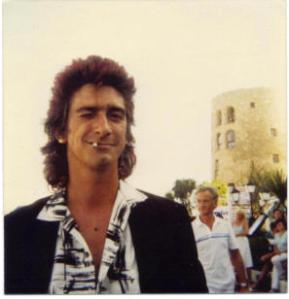 His name might be unfamiliar, but today marks the 30th anniversary of Gary Holton’s death. The English entertainer’s list of achievements is considerable. He lived life to the fullest and did things most of us can only dream about. For starters, he once toured as lead singer with the Damned in place of Dave Vanian, he had a number one single in Norway where he was a massive star, appeared on Top of the Pops and the Tube, was the subject of articles in NME and Melody Maker, and fronted the glam rock band Heavy Metal Kids and later Casino Steel, who were signed to Polydor records. A year to the day after Bon Scott’s death, Holton auditioned to join AC/DC, turning up at the venue with a crate of whisky. Rumour has it that the sole reason he didn’t get the job was that the band didn’t want another alcoholic singer.

Despite his love of rock n’ roll, it was Holton’s acting endeavours that really made his name. He had minor roles in Quadrophenia, Minder and Shoestring, before finding fame as flash cockney carpenter Wayne in the classic comedy drama Auf Wiedersehen, Pet, about a group of British builders working abroad. His character displayed a penchant for wine, women and song, something which by all accounts mirrored his off-screen persona. At the peak of his career he was offered the part of ‘Nasty’ Nick Cotton in the long-running soap Eastenders, but declined for reasons unknown. By some weird twist of fate, the part eventually went to one of Holton’s best mates, John Altman. By some even weirder twist of fate, in 2010 Altman took Holton’s place in a revamped version of Heavy Metal kids.

Gary Holton died from an overdose of alcohol and morphine in his flat in London before finishing the second series of the show that made him famous, his parts being completed by clever use of body doubles and sound editing. The cast all went to his funeral, and resisted attempts to make a third season for 15 years despite increasingly-lucrative offers. A recovering heroin addict, the inquest into Holton’s death revealed his blood contained almost twice the lethal level of morphine (o.8 mg per litre). Poignantly, the last single he released shortly before he died was a song called ‘Catch a Falling Star,’ and when the grim reaper came knocking he had been declared bankrupt twice. A tragic, sad end to a life that promised so much. Still, he probably packed more into his 33 years than most of us could in several lifetimes. His ashes were laid to rest next to his grandparent’s grave in Welshpool, Powys.

Since his death, Holton has achieved cult status. A hard-living, hard-loving rocker with a prodigious talent who loved the pub, when he wasn’t off being famous, he could often be found pulling pints at the establishments his parents ran, or playing dominoes with the regulars. Apparently, his records still outsell the Beatles in Norway. What a legend. RIP, Gary Holton. I hope you caught that falling star.

I write stuff. Pretty much any stuff. My dark fiction has appeared in Asphalt Jungle, Raw Nerve, Roadworks, Dark Valentine, Screams of Terror, Shallow Graves, Fantastic Horror, The Literary Hatchet, Gore and numerous anthologies. My first book, Into the Dragon's Lair – A Supernatural History of Wales was published back in 2003, and I've worked extensively in the freelance journalism industry, contributing features to numerous international publications including Fortean Times, Bizarre, Urban Ink, Loaded, Record Collector, Maxim, and a regular column to the Western Mail newspaper. I lived in China for over five years where I taught English during my search for enlightenment, before moving back to the UK in January 2013 to work as staff writer on Nuts magazine. Later, I was senior writer on Forever Sports magazine and associate editor at Coach magazine, before leaving to chance my arm in the world of pro freelance. In recent times I've devoted more time to dark fiction, my latest releases being Human Waste (Deviant Dolls Publications), Tethered (Terror Tract Publishing) and X4, my fourth anthology of short fiction. I also edit, copy write, proofread and ghost write, and drink far too much craft beer. END_OF_DOCUMENT_TOKEN_TO_BE_REPLACED
This entry was posted on Sunday, October 25th, 2015 at 1:00 pm and tagged with Auf Wiedersehen, Auf Wiedersehen Pet, British comedy, death, drama, eighties, Gary Holton, Great Britain, life, London, Television, tribute and posted in Blogging, History, Life, London, music, National Identity, Tribute. You can follow any responses to this entry through the RSS 2.0 feed.
« Film Review – Darkest Day (2015)
Mick Wall – UNCENSORED (Part I) »