Today is Chinese New Year! That means it’s time for another China story from the vault. I’ve posted quite a lot here about China, like the time I ate brains and the time I got to be Bad Santa. There was also the snake shop, and when I got pulled in Shanghai airport and some beefy security guards tried to take my cheese off me. No way, mister! Even the most mundane things, like getting a haircut, take on a whole new meaning in the Middle Kingdom.

In 2009-2010 I lived in an extremely inhospitable northern industrial city called Tianjin. Think of it as a bit like a Chinese Middlesbrough. I only went there to be closer to a girl I was dating, who then promptly dumped me for another dude leaving me alone, miserable and stuck in a job I hated. Said job was teaching English in a primary school. It wasn’t the teaching I disliked. it was the kids. There, I said it. It’s probably hard enough trying to educate children that young when you speak the same language, but at least then you can reason with them. If you don’t speak the same language, forget it. It’s like fighting a war with no weapons. Every class was anarchy.

Eventually I hit on the bright idea of rewarding the good kids with lollipops, hoping the naughty ones would see what they were missing and fall in line. It didn’t quite work out like that. Instead, every kid who didn’t get a lollipop wanted a fucking lollipop and threw an epic temper tantrum until they got one. Mostly products of the one-child policy, they were a mass of Little Emperors. They broke me. Regularly. I would cave in and give them all lollipops just to shut them up, costing myself a small fortune in sugary bribes.

One of the few things I liked about this school was the little breakfast stall stationed outside, selling a selection of traditional local food, along with some more normal fare like boiled eggs and corn on the cob. I stopped by there most mornings. It was cheap, and saved me time.

There was a lot I didn’t like about the school. But the worst thing were the toilets. Toilets in China are gruesome places at the best of times. But in this school there were no locks on the doors, apparently because the little shits would shut themselves in. That meant whenever I used it, I had a swarm of kids around me pointing and laughing at my penis. It was enough to give anyone a complex.

I noticed the boys all peed in buckets, which struck me as a bit weird. But lots of things struck me as a bit weird in China, and the buckets of piss just blended in with all the other weirdness. People would come in sporadically, carry the full buckets out, and come back with empty ones. I assumed they were emptying them down a drain somewhere. I didn’t know for certain, and frankly, I didn’t care. I didn’t think much about it. Until one day, when I was talking to my teaching assistant and he told me something that first confused me, then repulsed me, then horrified me to the core.

The school was selling the pee. Those people who came in to take out the buckets of piss were actually paying the school for the privilege.

“What? Who would buy buckets of pee?”

“The people at the breakfast stall where you go in the mornings.”

“What’s that in English?”

“Not sure. Little virgin boy pee egg or something.”

“Excuse me? Little virgin boy what?”

He explained that in some regions of China, Tianjin included, urine from young boys, preferably under the age of ten, is harvested. It’s boiled, and eggs are soaked in it for a few hours. Then the shells are cracked, presumably to let more of the pissy goodness inside, and it is boiled some more. The practice has been going on for centuries, and is tied to TCM (Traditional Chinese Medicine). Eating little virgin boy piss eggs is said to reduce high blood pressure, stop you catching a cold, and relieve joint pain. I’d been unwittingly eating them for months.

I’ve never been able to look at a boiled egg in quite the same way since.

As you can see, I tend to lean toward contemporary horror fiction, for obvious reasons, but I try to read widely. Promise. I love a good autobiography, the odd debauched rock tale, and the occasional peak into history. The only rule is I have to actually finish the book in order for it to qualify. So without further a-do, here is a complete list of the books I read in 2016.

The Haunting of Blackwood house by Darcy Coates (2015)

Dead Harvest: A Collection of Dark Tales Vol I by Various (2013)

The Mothman Prophecies by John Keel (1975)

I Can Taste the Blood by Various Authors (2016)

The Films of Danny Dyer by Jonathan Sothcott & James Mullinger (2013)

Vicar on the Underground

I was commuting home from work one evening on the Northern Line somewhere between Goodge Street and East Finchley, when a vicar got on the tube. Seeing a vicar on the Northern Line wasn’t that unusual in itself, God knows I’ve seen a lot more weird shit than that, but something about the way the man carried himself was unusual. Even in the midst of rush hour chaos, he was the image of calmness and serenity.

Just as he got on the train, a couple of tourists got off and two seats opened up. Seats on the underground at that time of the day are as rare as rocking horse shit, and the vicar swooped right in without even breaking stride. But even though the carriage was rammed and people were falling over each other as they fought for space, the seat next to the vicar remained empty, almost as if people sensed not to get too close. I watched him from afar for a while, as you do on, without ever approaching him. But later, I couldn’t stop thinking about the Vicar on the Underground and a few days later this story leaked out.

The whole process was comparatively easy. I wrote the first draft of the story in a few days (at 2,700 words it’s at the shorter end of the spectrum), revised and edited it over the next couple of weeks, then started submitting it to markets. It was picked up by Oscillate Wildly Press almost immediately. Something else that’s as rare as rocking horse shit. 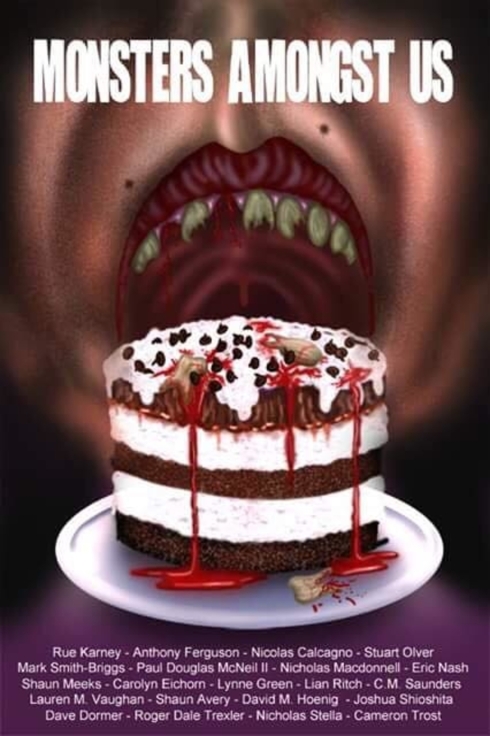 From the promotional material:

The monsters we have come to know and love take a backseat as we delve into the darkest, most hideous depths of a monster that has taken centre stage as of late–HUMANS.

The collected tales herein will take you on a wild ride into the monstrous aspects of humankind, revealing some of the scariest atrocities humans are capable of doing, the ‘demons’ lurking in their heads, the ugliness of the pure human soul. You’ll meet artists, handymen, grieving parents, desperate alcoholics, and the delightful Sally Burns.

This debut anthology features the work of a variety of talented writers, including a few of the award-winning and darkly imaginative authors writing today. When you are ready, settle down, lock the window, and remember…the only monsters to fear are ourselves.

You can check out the anthology HERE

X Sample, my latest release through Deviant Dolls Publications, is available now. It contains a trio of deliciously dark tales ripe for sinking your teeth into and as the title suggests, is designed to give new readers a little taste of my work, as well as giving my existing readers something ‘to be going on with’ until my next book drops in April.

The Devil & Jim Rosenthal: A new parent gets much more than he bargained for.
Date Night: A man’s wife visits the bathroom in a fancy restaurant, and doesn’t come back out.
The Delectable Hearts: A jaded music journalist goes in search of The Next Big Thing. Unfortunately for him, he just might have found it.

Extract from No Man’s Land: Horror in the Trenches

The Light in Shotgun Horror Clips

A bit late, I know. But if you are interested, my flash fiction story The Light, which addresses the question we all think about from time to time, is included in issue #3 of Shotgun Horror Clips, available to view online now.

Edited by David Wilson, Shotgun Horror Clips is a FREE companion title to Dead Lights which launches in February 2017. Check out the awesome cover art by Shawn Langley: