Because they so often work within limited budgets, Japanese film-makers are forced to rely on plot, atmospherics and pure acting ability to make their work shine. Things that are sadly often neglected in Hollywood these days. One recent Saturday night, with a pathetically empty social calendar and a storm raging outside, I decided a J-Horror marathon (with English subs, obvs) was in order.

On the back of successful fore-runners like Koji Suzuki’s classic Ringu (The Ring), Pulse, and Dark Water, in 2008 One Missed Call became the latest Japanese horror movie to be remade by an American studio for an international audience. I’d watched the remake for comparison a couple of days earlier, and though the basic storyline pretty much stays true to the original, it’s more of a sugary teen flick lacking any real resonance and emotional impact. In short, the movie stinks.

The original is something else entirely.

On the surface the premise is pretty standard fare; a young student receives a voicemail on her mobile on which she can hear herself screaming. Putting two and two together, she decides the message must be from her future self warning of her imminent demise. When the message proves prophetic, it soon transpires that it’s just the latest in a long line of similar events and the girl’s friend Yumi takes it upon herself to solve the mystery. The result is a pretty intense, suspenseful, psychological experience, rather than the kind of uninspired gore fest we are so often subjected to. Typically of J-horror, there is a curse involved, some rogue technology, and hot girls in danger. We’re off to a decent start. 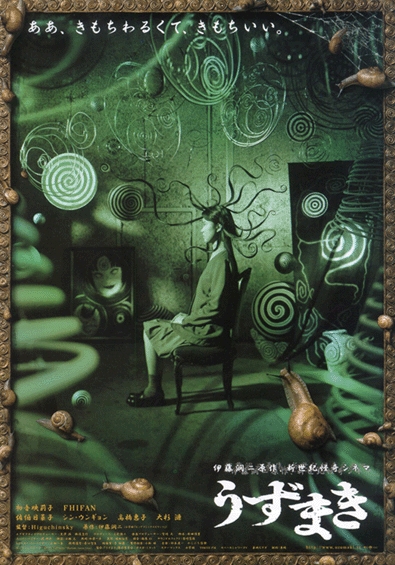 No rest for the wicked, it’s straight into movie number two, which proves to be one of the weirdest, creepiest, most fucked up films I have ever seen. It was adapted from a Junji Oto manga series, so I should have expected as much. His other notable works include Tomie, about an immortal girl who is so beautiful she drives people insane, and Gyu, about killer fish with metal legs. Yep, that’s the kind of guy we are dealing with.

Uzumaki is about a town obsessed with spirals. To be ‘at one’ with uzumaki, one character commits suicide by crawling inside a washing machine. The result is not pleasant. His wife then becomes so anti-spiral that she chops off all her fingertips so as not to have anything resembling a spiral on her body. That plan falls apart when she learns that there is a spiral-esque vortex buried in the deepest part of the human ear. I won’t say anymore so as not to spoil it, but you can probably guess it doesn’t end well for her. Oh, and then all the students at the local school start turning into giant snails. What the absolute fuck? I’m glad I watched this early on in the marathon. It’s the kind of thing that can make a grown man go scurrying off crying for his mother.

After a quick pit-stop to make coffee and grab some Dorito’s, it’s straight back on it. The subtitles were out of synch on this one. I didn’t know what people were saying until about three minutes after they’d said it, which made the whole experience even more surreal. Someone would do something, then you’d find out why they were doing it later. The name alone is enough to give you shivers. The Kuchisake-Onna (slit-mouthed woman) is a bi-product of a real playground legend. Those Japanese kids, huh? A tall, skinny woman wearing a long trench coat, pointy shoes and a surgical mask covering her horribly disfigured face is said to appear and ask ‘Am I pretty?’ before carting off unruly school kids and doing unspeakable things to them with a massive pair of scissors. So far, so creepy. But things take a nasty turn when the urban legend turns out to be real, and one-by-one kids start disappearing. A pair of intrepid young teachers then set out to uncover the truth, and reveal one shocking secret after another. Harrowing and atmospheric, The Slit-Mouthed Woman (aka Carved) contains most of the elements audiences have come to expect from J-Horror. Curses, vengeful spirits, abused children, disused buildings, a haunting musical score and cold, brutal violence. It’s all here. If one film sums up post-Ringu J-Horror, it’s this. The last scene will chill you to the bone. 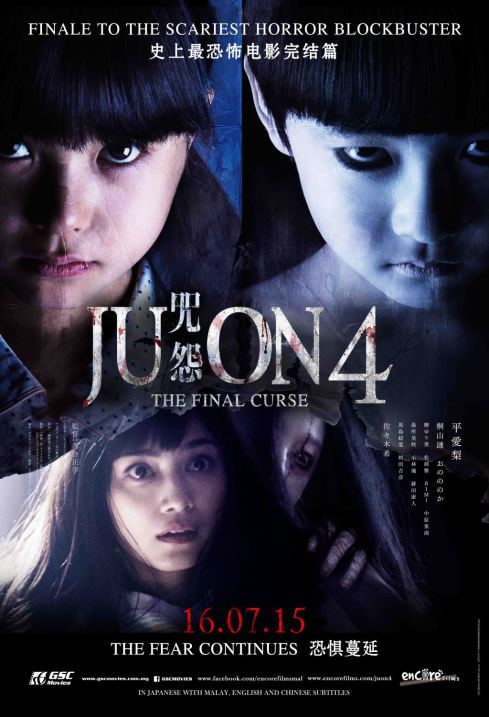 You might not know this, but whereas the turgid American incarnation of the Grudge franchise was wisely curtailed after three instalments, the Japanese juggernaut just kept on rolling. And rolling. If you include that trio of western Grudges, this is the eleventh Ju-On (Grudge/Curse) film in the series originally created by Takashi Shimizu, and a continuation of last year’s Ju-On: The Beginning of the End, itself a reboot of the earlier films.

Phew. Now that’s all cleared up, on with the show. This latest (and allegedly last) instalment is a Paramount Pictures production, meaning it’s much more polished than you would normally expect. No shaky camera work or sub-par special effects here. Without getting too much into it, the plot evolves around Mai, who goes in search of her missing younger sister, the elementary school teacher from the last film (which is helpfully re-capped at the beginning). Let’s just say she gets more than she bargained for when Toshio, the terrifying little kid who makes those annoying cat noises, puts in an extended appearance. The plot is a bit stretched, as it would be after ten previous outings, but overall this film is pretty slick.

It’s that man again. Our friend Koji of the Slit-Mouthed Woman fame. To be honest, I don’t know what he was thinking with this. This film is banned in the UK, which is usually a good sign. I’m a horror fan, and I’ve seen some pretty far out shit. I’ve developed a reasonably strong stomach, or so I thought. Not this time. This is way out of my league. It’s downright fucking nasty, and I was soon sorry I munched all those Doritos.

Two young lovers are walking down the street, minding their own business, when they are kidnapped by a mad doctor who then proceeds to do the most awful, sadistic, depraved things to them. That’s the whole storyline right there, and it’s not fun to watch. In fact, it’s extremely fucking hard to watch. Which I guess is the point. If so, mission accomplished, Shi Shiraishi. You twisted fuck. This is the only film I’ve ever not been able to finish. I don’t know if that’s a criticism or an accolade.

This article first appeared on the Deviant Dolls website.

I write stuff. Pretty much any stuff. My dark fiction has appeared in Asphalt Jungle, Raw Nerve, Roadworks, Dark Valentine, Screams of Terror, Shallow Graves, Fantastic Horror, The Literary Hatchet, Gore and numerous anthologies. My first book, Into the Dragon's Lair – A Supernatural History of Wales was published back in 2003, and I've worked extensively in the freelance journalism industry, contributing features to numerous international publications including Fortean Times, Bizarre, Urban Ink, Loaded, Record Collector, Maxim, and a regular column to the Western Mail newspaper. I lived in China for over five years where I taught English during my search for enlightenment, before moving back to the UK in January 2013 to work as staff writer on Nuts magazine. Later, I was senior writer on Forever Sports magazine and associate editor at Coach magazine, before leaving to chance my arm in the world of pro freelance. In recent times I've devoted more time to dark fiction, my latest releases being Human Waste (Deviant Dolls Publications), Tethered (Terror Tract Publishing) and X4, my fourth anthology of short fiction. I also edit, copy write, proofread and ghost write, and drink far too much craft beer. END_OF_DOCUMENT_TOKEN_TO_BE_REPLACED
This entry was posted on Saturday, May 27th, 2017 at 7:05 pm and tagged with Asia, Carved, cinema, curse, films, Final Curse, Grotesque, horror, Japan, Ju-On, movie marathon, movies, One Missed Call, review, Slit-Mouthed Woman, urban legend, Uzumaki and posted in Films, horror, Leisure, paranormal, Reviews. You can follow any responses to this entry through the RSS 2.0 feed.
« Subject #270374 in DOA III
Matt Hickman’s Sinister Scribblings »

6 responses to “The J-Horror Movie Marathon”