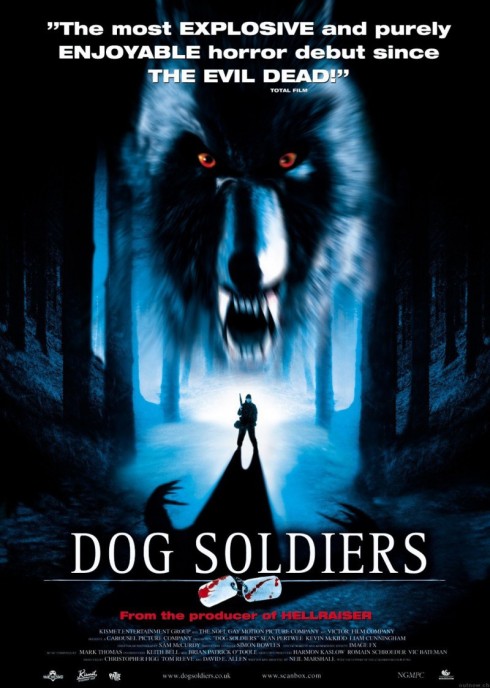 “It puts things into perspective when you have to scoop your mate up with a shovel and put him in a bag.”

So says Sgt Wells (Pertwee). There haven’t been many British horror films over the past decade or three more worthy of praise than Dog Soldiers. From the opening scenes, when a couple camping in the Scottish Highlands are ripped apart by a ferocious beast, you’re left in little doubt that this is a werewolf flick. The signs are definitely there, not least the inclusion of a solid silver knife, which the couple don’t use to defend themselves. Doh. Cut to a few weeks later, and a group black-clad SAS fellas on a training exercise. Whilst sitting around a fire telling war stories and complaining about missing the football, a mashed-up animal carcass somehow gets chucked at them. I think it’s a deer, but it’s pretty hard to tell. While investigating this strange occurrence, they stumble across their SAS adversaries. Except they’re all dead, the only survivor being a severely traumatised Captain Ryan (Cunningham) who is full of gory tales of his company being attacked and torn apart. Luckily, they left their guns and ammo, which our boys gleefully commandeer as they were only given blanks. I sense a plot hole here. I mean, if it really was a training exercise, how come one side was given live rounds? Anyway, moving on, it soon becomes apparent that what they are up against isn’t human. At least, not all the time.

Soon after they come under attack and Sgt Wells almost gets ripped in half. (“My guts are coming out!”). He doesn’t die, though. In fact, being mortally wounded just seems to piss him off. He keeps soldiering on and swearing at everyone. A passing zoologist called Megan (Emma Cleasby) saves the day when she drives up in a Land Rover and offers them a lift. Yes, please! She takes them to an isolated farmhouse, where they hope to regroup and radio for help. Obviously, things don’t quite work out that way, and a bloody battle to the death between soldiers and werewolves ensues. Can they survive until dawn? Will it make any difference if they do? Why is the SAS bloke acting so sketchy? And perhaps most importantly, who won the footy match they were all so concerned about?

The answer to that last question is England, as the match they are referring to is believed to be the World Cup qualifier on September 1st 2001 in Munich when they thrashed Germany 5-1. The best scene is when Sam the sheepdog keeps trying to eat Sgt Wells’ guts as they spill out of his body, one of the other guys sees it, and throws up on Captain Ryan’s head. Soon after, they perform some much-needed first aid on him with the help of a bottle of whisky and some superglue.

Despite his woes, Sgt Wells makes a splendid recovery and outlives most of the others. Must have been the whisky. Or the fact that he’s slowly turning. The cast is like a who’s who of English acting talent as we see a pre-Grey’s Anatomy Kevin McKidd teamed up with a pre-Game of Thrones Liam Cunningham and a post-ID Sean Pertwee whose character is named Sgt Harry G Wells, a clear nod to the sci-fi writer HG Wells. Throughout the film there are also references to Zulu, the Matrix, An American Werewolf in London, and Evil Dead among others, making it an anorak’s dream. Even 90’s lad show They Think It’s All Over gets a tongue-in-cheek mention. The director, Neil Marshall, went on to be involved with The Descent franchise, Doomsday, Centurion, as well as episodes of Westworld, Hannibal and Game of Thrones. If you like your horror bloody, funny, and gore-tastic, you can do a lot worse than Dog Soldiers. You’re probably never going to see another northern bloke holding a flare aloft and singing, “Come and ‘ave a go if you think you’re ‘ard enough!” to a group of rampaging lycanthropes ever again. That man, incidentally, was played by Chris Robson, and he’s a French teacher in the north of England now. Famed for it’s (very) black comedy elements, upon its release, Dog Soldiers achieved cult status in the UK, but I have no idea how it was received in the rest of the world. A much-anticipated sequel Dog Soldiers 2: Fresh Meat was supposed to have been released in 2014 but wasn’t forthcoming. More’s the pity. The world needs more movies like this.

Although set in the Scottish Highlands, apart from a few aerial shots the movie was filmed almost entirely in Luxembourg.

I write stuff. Pretty much any stuff. My fiction and non-fiction has appeared in over a hundred publications worldwide and my books have been both traditionally and independently published. My first book, Into the Dragon's Lair – A Supernatural History of Wales was published back in 2003, and I've worked extensively in the freelance journalism industry, contributing features to numerous international publications including Fortean Times, Bizarre, Urban Ink, Loaded, Record Collector, Maxim, and a regular column to the Western Mail newspaper. I lived in China for over nine years where I taught English at universities in Beijing, Changsha and Guangzhou during my search for enlightenment, before moving back to the UK in January 2013 to work as staff writer on Nuts magazine. Later, I was senior writer on Forever Sports magazine, associate editor at a shortlived title called Coach, and I currently write business news for a trade magazine about the plastics industry. It's far more satisfying than it sounds. My latest fiction releases have been Human Waste (on Deviant Dolls Publications) and X5, my fifth collection of short fiction. I also edit, proofread, ghost write, and drink far too much craft beer. END_OF_DOCUMENT_TOKEN_TO_BE_REPLACED
This entry was posted on Saturday, January 13th, 2018 at 8:59 pm and tagged with British, comedy, Dog Soldiers, film, horror, Kevin McKidd, lycanthrope, movie, RetView, Scotland, Sean Pertwee, werewolf, werewolf film, werewolves and posted in comedy, Films, horror, Retro Reviews (RetViews), War. You can follow any responses to this entry through the RSS 2.0 feed.
« The Bookshelf 2017
Film Review – The Void (2016) »