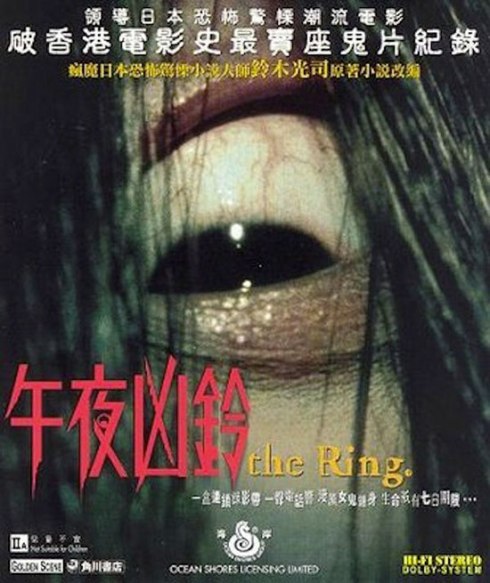 It would be a huge generalization to say that I love them all because like anything else, the genre can be a bit hit n’ miss. But I’ve spoken at length before about my fondness for Japanese horror movies. Ringu (the original version of the Ring, followed in 2002 by a big-budget and hugely successful American remake) is quite possibly the king of J-Horror. It’s without doubt the movie responsible for sparking a western fascination with Asian horror movies which was mined extensively over the next decade or so with varying degrees of success. Think Pulse, the Grudge and Dark Water, all of which were remade for western audiences.

It wouldn’t be an exaggeration to suggest that until Ringu burst onto the screens in all its grainy glory, western horror cinema was going through a notoriously bad time. We were still bogged down in the deranged serial killer/slasher genre, which was getting decidedly old by then. There are only so many cheap scares and bloody, increasingly imaginative kills an audience can tolerate before they get desensitized to the whole thing. We wanted something new. Something that wasn’t the same as everything else. Then came Ringu.

The film begins innocuously enough, giving barely a hint of the edge-of-the-seat creepiness to follow. Two cutesy teenaged girls, Masami (Sato) and Tomoko (Takeuchi) are messing around in an apartment and discussing a cursed videotape which supposedly kills its victims after they receive a phone call seven days after watching it, when one of them confesses to watching just such a strange tape a week earlier. Then the phone rings. Some time later, reporter Reiko Asakawa (Matsushima) learns that her niece Tomoko (Yup, thadda one) and three of her friends died under mysterious circumstances, and sets about investigating. The trail leads to a cabin in the Izu area of Japan. There, she finds an unlabelled video tape. Obviously, she watches it, thereby starting off a trail of events which might just be the death of her. She enlists the help of her ex-husband (Sanada) and together they attempt to break the spell and avoid Reiko’s imminent fate. More than two decades on, that unforgettable scene where Sadako the ghost girl climbs out of a well (and then through a television screen) remains one of the simplest yet most evocative slices of cinematic history ever committed to, er, videotape? Though many have tried to replicate the effect, it has never been emulated.

Adapted from the 1991 novel Ring by Koji Suzuki who, in turn, based the story on an urban myth , the movie has long been noted as examining Japan’s obsession with the clash between tradition and modernity. This is only one of the many subtexts critics have pointed to, another popular one being that ghost girl Sadako is a model for the modern woman and how independence conflicts with the traditional core values of motherhood. Whether you agree with any of that or not, it’s clear that Ringu is an extraordinarily complex film that works on many levels. It is a visually stunning piece of work, so heavily steeped in Japanese culture that as a westerner it’s practically impossible to grasp all the subtleties. It draws on many aspects of history, folklore, and even theatre, to create a mash-up that is much more about fostering a pervasive sense of dread rather than going for cheap jump scares. Much was made at the time about Sadako’s jerky, twisty, hauntingly deliberate movements. These were actually based on a kind of interpretive Japanese dance called Butoh, which became popular after the Second World War. Even Sadako’s classic look is no accident, having been based on a specific species of ghost called the yūrei, which invariably feature stark white faces, long black hair, and white kimonos. The reason yūrei appear this way is because that’s how Japanese women looked when they were buried.

In fact, everything about Ringu was designed to creep the viewer out. One way it achieved this was through use of a technique called ‘Ma,’ where sound effects and musical scores are deliberately punctuated with sequences of rapid pauses or even long, drawn-out silences. This was another way the film differentiates itself significantly from Western films. While Western horror uses sound to let the audience know how they should be feeling, J-Horror (and Ringu specifically), uses Ma as a way to keep the audience thrown off balance. This is just one reason the Guardian named it the 12th Best Horror Film of all Time. By the way, you can watch it in its entirety (with English subtitles) HERE.

In what proved to be a shrewd and innovative move at the time, both Ringu and its sequel Rasen (not to be confused with Ring 2), were released in Japan on the same day, January 31st 1998. Both films had different writers and directors, yet shared many of the same cast members. Shrewd and innovative this may have been, but successful it wasn’t as Ringu was an international hit and Rasen a comparative flop.

I write stuff. Pretty much any stuff. My dark fiction has appeared in Asphalt Jungle, Raw Nerve, Roadworks, Dark Valentine, Screams of Terror, Shallow Graves, Fantastic Horror, The Literary Hatchet, Gore and numerous anthologies. My first book, Into the Dragon's Lair – A Supernatural History of Wales was published back in 2003, and I've worked extensively in the freelance journalism industry, contributing features to numerous international publications including Fortean Times, Bizarre, Urban Ink, Loaded, Record Collector, Maxim, and a regular column to the Western Mail newspaper. I lived in China for over five years where I taught English during my search for enlightenment, before moving back to the UK in January 2013 to work as staff writer on Nuts magazine. Later, I was senior writer on Forever Sports magazine and associate editor at Coach magazine, before leaving to chance my arm in the world of pro freelance. In recent times I've devoted more time to dark fiction, my latest releases being Human Waste (Deviant Dolls Publications), Tethered (Terror Tract Publishing) and X4, my fourth anthology of short fiction. I also edit, copy write, proofread and ghost write, and drink far too much craft beer. END_OF_DOCUMENT_TOKEN_TO_BE_REPLACED
This entry was posted on Friday, July 13th, 2018 at 7:38 pm and tagged with Asia, Asian horror, C.M. Saunders, film, horror, j-horror, Japan, japanese, movie, movies, RetView, review, Ringu, Sadako, the Ring and posted in Films, horror, Retro Reviews (RetViews). You can follow any responses to this entry through the RSS 2.0 feed.
« For the Love?
What Are You Reading? »