Everyone does lists of their Top 10 Horror films. I wanted to do something special for you instead. How about a Top 10 BRITISH Horror Film List? Not special enough? Well, taking it to the next level, you know how us Brits are renowned for our unique, irreverent, occasionally wacky yet sophisticated sense of humour? No? Well, we are. Sometimes it can be as subtle as an autumn breeze. Other times it can be fast, bloody, and brutal. Like a good bout of period sex. So… how about a Top 10 British COMEDY Horror Film List? Yeah, let’s do that.

Once upon a time, in a faraway land called 1980s Britain, there was a very popular comedy drama TV series. Boon was its name, and it was about a courier service-cum-private detective agency. It was so popular that at its peak a shrewd production company hired its two main stars, Michael Elphick and Neil Morrissey, to appear in a riotous low-budget horror romp in an attempt to capitalize on its burgeoning success. They only partially failed. In the beginning there are satanic rituals and rival biker gangs, climaxing in a motorcycle getting possessed and then purchased by an unsuspecting Noddy (Morrissey) who, coincidentally or otherwise, is a courier by trade. And then, people start having terrible ‘accidents’ and it appears the motorcycle is to blame. This is like Boon with the gloves off and the volume turned up, with blood, gore, dismemberments, swearing, lewd behaviour and even a talking turd. I shit you not.

This late-night Horror Channel stalwart sees a group of thuggish inner-city young offenders taken to an isolated Yorkshire town to do some community service. During a run-in with a group of local louts, one of their carers, Jim, falls and cuts open an artery in his leg. In a panic, the young offenders take him to a nearby pub to get help. Unfortunately, the locals (aka, ‘inbreds’) don’t like strangers in them parts. Not at all. They quickly decapitate poor Jim with a meat cleaver and lock the young offenders in the cellar, until they are taken out one by one to provide the village entertainment. Daft, disturbing and deeply offensive, the most puzzling thing about Inbred is just how far the makers managed to stretch a measly £109,000 budget, which is about half the cost of the average house in the UK.

It’s got Danny Dyer in it, and it’s about a boy’s night out gone terribly wrong. Therefore, you just know it’s going to be crude, filthy and unashamedly misogynistic. What did you expect? At its core, it’s a parody of lad culture riffing on men’s supposed inherent fear of women. Luckily, it’s funny enough to compensate for all the Cosmopolitan schtick. Dyer, helped out by Noel Clarke, Stephen Graham and a few other less famous faces, head to a fabled town where women allegedly outnumber men 4-1. When they get there, they realize this is by no means a good thing as every female in sight has fallen victim to a biological toxin that turns them all into frenzied, blood-thirsty zombie types. It’s a battle of the sexes for sure.

Apparently, very few people outside Britain have heard of the legendary Carry On films. Quite frankly, this appalls me. The films (all 30-plus of them, including such gems as Carry On Teacher, Carry On Behind and Carry On Doctor) are a British institution. Where else are you going to get fart jokes and edgy one-liners about hard-on’s and knockers on terrestrial telly at Sunday tea times? This particular outing is a parody of the Hammer Horror films, which were peaking in popularity at the time, and tells the story of a series of mysterious disappearances in the English countryside, which ultimately leads police to a mad doctor in a castle and a monster called Oddbod. Admittedly, the plot is a bit thin in this one, but the gags are timeless.

Before James Corden became a late-night TV host (or got his driving license) he starred in films like this. The critics hated it, with some bloke from the Times calling it an, “Instantly forgettable lad mag farce.” But that isn’t really saying too much. This was an era when it was fashionable to lamblast lad mags at every opportunity and besides, the Times don’t like any films. Even today it’s rare to see a film get more than two stars out of five, unless it’s an artsy fartsy French drama you need multiple degrees to understand. Personally, as far as low-brow humour goes, I thought this unofficial companion to Doghouse was a riot. When Jimmy (Mathew Horne) is dumped and Fletch (Corden), is sacked from his job as a clown for punching a kid, the duo decide to escape for the weekend to an idyllic village in Norfolk. A village which, unbeknownst to them, has been cursed, leading to a sizeable percentage of lesbian vampires. And you thought Eastern European immigrants were the problem.

This is one of the more slick, big-budget entries on this list. Most of the time you just wouldn’t think it, which I guess is the point, as self-defeating as that is. Grabbers is essentially an alien invasion creature feature, the comedy aspect fuelled primarily by the fact that alcohol is found to be toxic to the invaders, which encourages the inhabitants of a small Irish village to lock themselves in the pub and get rat-arsed as a defence mechanism. Think of this one as Father Ted crossed with the Blob and garnished with a liberal sprinkling of Cloverfield. It’s not a feckin’ lobster! 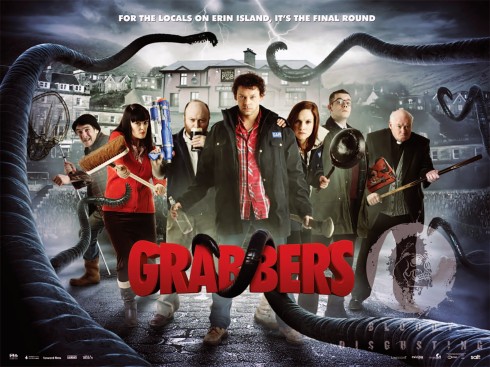 Severance mixes humour, bravado, and some of the most brutal body horror this side of the Saw franchise to great effect, making it one of the stand-out Brit Horror films of the past two decades. The plot revolves around a group of office staff who are sent to Hungary on a team building exercise. As you would find in any office, the cast is made up of an eclectic and varied group of characters, all living up to certain long-held stereotypes. Danny Dyer pops up again, playing everyman caner Steve, who sees the getaway as the perfect opportunity to get off his tits. He’s munching magic mushrooms and puffing on a spliff in the toilet before the coach even stops (“Have I pissed meself?”). All in all, Severance comes off like a mash-up between Hostel and The Office. Brill.

There haven’t been many British horror films over the past decade or two more worthy of praise than Dog Soldiers. From the opening scenes, when a couple camping in the Scottish Highlands are ripped apart by a ferocious beast, you’re left in little doubt that this is a werewolf flick. If you like your horror bloody, funny, and gore-tastic, you can do a lot worse than this. You’re probably never going to see another northern bloke holding a flare aloft and singing, “Come and ‘ave a go if you think you’re ‘ard enough!” to a group of rampaging lycanthropes ever again. That man, incidentally, was played by an actor called Chris Robson, and he’s a French teacher in the north of England now. One of the few genuine, undisputed cult classics. Miss it at your peril.

Some films you see during your impressionable formative years make an impression on you. Others scar you for life. For me, An American werewolf in London belongs firmly in the latter category. The subway chase scene gave me nightmares and years later when I first moved to London I remember going out of my way to incorporate Tottenham Court Road station (where the scene was filmed) in my daily commute. It never failed to give me chills, largely because the only thing about the station that has changed in the past 35 years are the fucking posters on the walls. The story goes that when director John Landis first started touting it, he had trouble securing finances with most would-be investors claiming the script was too frightening to be a comedy and too funny to be frightening. Eventually, PolyGram Pictures put up the $10 million, and were glad they did when it went on to become a box office smash and win an Academy Award for its special effects (Rick Baker went on to win six more from eleven nominations. A record). The story? It’s about an American werewolf in London, innit?

Could any other film really take top spot in this list? Not on your nelly. This, the first instalment of Edgar Wright and Simon Pegg’s so-called Three Flavours Cornetto trilogy (the others films being Hot Fuzz and The World’s End) is a bona-fide modern classic. Whilst dealing with feuding housemates, a demanding girlfriend and a shitty job, Shaun (Pegg) wakes up one morning with a hangover to find he’s in the midst of a zombie apocalypse. We’ve all been there. Naturally, the only place to go to wait for the world to restore order is the local pub. Brilliant performances by the cream of noughties British comedic talent and commendable special effects, topped off by a hilariously witty script. The perfect introduction to a positively booming sub-genre.

While you’re here, why not check out the Japanese Horror Movie Marathon?

My latest release, Human Waste: A Short Splatterpunk Story, is out now on Deviant Doll Publications.

I write stuff. Pretty much any stuff. My dark fiction has appeared in Asphalt Jungle, Raw Nerve, Roadworks, Dark Valentine, Screams of Terror, Shallow Graves, Fantastic Horror, The Literary Hatchet, Gore and numerous anthologies. My first book, Into the Dragon's Lair – A Supernatural History of Wales was published back in 2003, and I've worked extensively in the freelance journalism industry, contributing features to numerous international publications including Fortean Times, Bizarre, Urban Ink, Loaded, Record Collector, Maxim, and a regular column to the Western Mail newspaper. I lived in China for over five years where I taught English during my search for enlightenment, before moving back to the UK in January 2013 to work as staff writer on Nuts magazine. Later, I was senior writer on Forever Sports magazine and associate editor at Coach magazine, before leaving to chance my arm in the world of pro freelance. In recent times I've devoted more time to dark fiction, my latest releases being Human Waste (Deviant Dolls Publications), Tethered (Terror Tract Publishing) and X4, my fourth anthology of short fiction. I also edit, copy write, proofread and ghost write, and drink far too much craft beer. END_OF_DOCUMENT_TOKEN_TO_BE_REPLACED
This entry was posted on Saturday, August 25th, 2018 at 6:23 pm and tagged with An American Werewolf in London, blogging, comedy, Danny Dyer, Dog Soldiers, film, Grabbers, horror, James corden, life, movie, review, Severance, Shaun of the Dead, Simon Pegg, top ten British comedy horror films, top ten horror comedy films, wordpress and posted in comedy, Films, horror, Life, Retro Reviews (RetViews), Reviews. You can follow any responses to this entry through the RSS 2.0 feed.
« RetView #13 – Witchfinder General
TV Time »