I have a brief announcement.

More than eight years on from it’s original release on Damnation Books, my novella Dead of Night will soon see the light of day once more. Completely re-edited and re-vamped, it features new and exclusive cover art by none other than the Dark Scrybe himself, Greg Chapman.

And here we are. 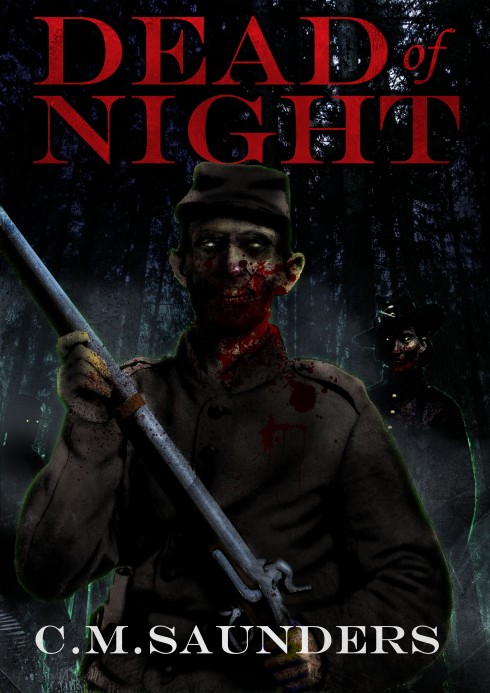 Dead of Night is available for pre-order now on ebook and paperback.

They wouldn’t let me be Deadpool…

If you could have any superpower, what would it be? This question is harder than you’d think to answer, because there are so many possibilities. The Dolls have considered their limitations as mere mortals, and we all have a power we’d love to claim, even for a little while:

Steve: The ability to change people’s minds in internet arguments. I realise that’s very fantastical, but indulge me.

Renee: Time travel and/or immortality. I can’t make up my mind. It’d be nice to have both. Although, if you can travel through time, isn’t that a sort of immortality? I guess it depends on the rules of the time travel ability, right? I don’t know. Let’s go with immortality. I’m pretty clumsy and I’m sure my death will be the result of some stupid and/or embarrassing thing that could’ve been avoided. With immortality, I can’t hurt myself too badly.

Unlike near-neighbours Italy, with a few notable exceptions, Spain isn’t renowned for producing horror movies, something which makes [REC] all the more surprising. And terrifying. The whole thing is horribly realistic, a fact aided by utilising the much-maligned ‘found footage’ method of filming and a ‘shaky’ hand-held camera. If nothing else, [REC] proves than when done well, this can be an incredibly effective technique. Another contributing factor was the casting of Manuela Velasco (an actual TV presenter in her native Spain) as the lead, Angela Vidal, along with a bunch of unknowns. For comparison, this would be a bit like a ballsy little-known British independent filmmaker somehow persuading Lorraine Kelly to take on the starring role in his latest gore fest. Genius.

In [REC], Lorraine Kelly, sorry, Manuela Velasco, sorry, Angela Vidal, is sent to a fire station in Barcelona with her cameraman Pablo (whose real name is Pablo, just to add another element of authenticity) during a night shift to record a TV documentary. They crack some jokes and mess around, and it’s all going rather well, until a call comes in about a woman trapped in her apartment screaming. Even then, nobody panics. What might seem damn creepy to normal people is apparently nothing out of the ordinary to seasoned fire fighters, who head out to rescue the woman with the TV crew in tow. When they arrive at the apartment building they meet up with some cops, so far so good, but then the woman in question freaks out (even more) and bites one of the cops in the throat. The tension builds and the apartment block’s other residents, a motley bunch if there ever was one, gather in the lobby. Safety in numbers and all that. The fire fighters try to take the mortally injured bitten-in-the-neck cop outside to receive medical attention, only to discover that the entire building is in lockdown, having been sealed off by the military. Oh shit. Unable to escape, the TV crew then realize that many of the building’s occupants are showing signs of sickness and violent, psychotic tendencies, and it soon becomes apparent that they have landed smack, bang in the middle of a zombie outbreak.

From there, it’s a bloody thrill ride. There is a fantastic scene where Pablo the cameraman batters a zombie to death with a camera while we are looking through it and lots of spurting blood and frothing at the mouth. But far from being just another zombie flick, this one has a bit more bite to it (sorry). Near the climax, Angela and Pablo find themselves in the penthouse suite, where they discover the cause of the virus which until then they had believed to be some form of rabies. The occupant of the penthouse suite was an agent of the Vatican who was researching an enzyme he believed to be the biological cause of demonic possession. On locating a possessed girl, he unwisely takes her back to his penthouse to conduct experiments on her, but during the process the enzyme mutates and turns viral. Left with little option, the agent does a runner and leaves the girl to starve to death. Except, she, you know, doesn’t.

From relatively humble beginnings, [REC] became a huge international smash, generating over $32 million in revenue from a mere $2 million budget, and spawning a succession of sequels culminating in the last of the franchise REC 4: Apocalypse in 2014. It was remade in the US where it was re-titled Quarantine (2008) which itself bore a sequel, Quarantine 2: Terminal (2011). Both are very serviceable horror films, but neither can quite capture the intensity of the original Spanish language version. Reviewing the film for the BBC, Jamie Russell called it, “A runaway rollercoaster of a fright flick,” praising the, “faux-docu handheld style,” and the sense of claustrophobia and confusion, ultimately concluding that “[REC] will definitely jangle the nerves.” The film remains very highly regarded among horror junkies, and is regularly included in ‘best of’ lists such as Time Out’s 100 Best Horror Films of all Time, where it placed number 60 in 2016.

The actors were never given the script in its entirety, so none of them knew of their character’s fates. Sometimes until they were actually filming the scenes. This meant the actors were, more often than not, stressed out, nervous and apprehensive during filming, ideal qualities for a horror film.

Go here for the previous entry in the Retview series!

“X3” by author Christian aka C.M. Saunders is a short collection of short horror stories he had published over the years. He begins his anthology with a piece called “Introduction: The Final Curtain” where he muses over death and mortality, and how it permeates everything, including literature. It’s what Friedrich Nietzsche called the “Death Drive”. Oddly enough, this rather obtuse opening led to some rather interesting short stories. The first story, “‘Til Death Do Us Part” is zombie fiction without the zombies. It’s primal, brutal and asks us what we’d do to survive for one more second on this godforsaken planet. Saunders brought the point home with this valiant line: “They were fighting and fucking everywhere like animals”. This matter-of-fact method of writing immediately piqued my interest. I knew I was onto something good.

Throughout the good short stories – not the bad ones – Saunders weaves a tapestry of horrifically fun humour and below-the-belt madness. There’s even a short story about a troll, with a sequel to the short story about the troll! As with all short story writing, each piece has to end in a solipsistic finale, a final twist to end all twists. I liken it to twisting the knife in a piece of meat. It’s an extremely difficult, well-documented feat. There are essays written about how a short story should be structured, compiled and created. If a writer lingers on a paragraph for too long, the short story is ruined and ends up in the tried-and-failed dustbin. Aside from poetry, short story writing is the most difficult literary art form. When an author gets it right, he or she really gets it right. But a short story can also turn into a bizarre, self-indulgent and experimental freak show. My point being, Saunders’ short story anthology has a touch of Bipolar, with extreme lows (“Gwraig Annwn” and “Slots-a-Pain”) and manic, thrilling highs (“The Delectable Hearts”, “Switchblade Sunday” and “The Elementals and I”).

He is an extremely friendly guy who wrote exactly what was needed to get our attention for an immediate review. He is also an excellent writer, but I don’t agree with putting all of your eggs into one basket, i.e. Putting short stories together from over the years into one volume. He should have been much more careful with his choices. I understand what it feels like to have that specific short story you wrote, the one which didn’t get the recognition it deserved, finally published. I’m also an author and I understand that inherent need. However, as a reviewer I have to follow extremely harsh guidelines in order for my review to have any merit or credibility in the real world.

Saunders failed with some of his short stories. I wanted more. I needed more. But there was nothing except an experimental foray into death literature. The stories which did work were extremely well done, brilliant even. I can easily say that “‘Til Death Do Us Part” will stick with me (no pun intended – look out for the ending) for a very long time. It was interesting, tragically beautiful and filled with a post-apocalyptic essence akin to “The Road” by Cormac McCarthy. “The Delectable Hearts” was a curious and interesting meta-commentary on the entertainment industry. I used to be a writer and reviewer for a worldwide entertainment media group, so I understood the character’s journalistic instincts to get the scoop on a new music band. The ending, as with the former, was both unsettling and optimistic – an awkward, albeit exciting paradox. I enjoyed every second of the better short stories in the anthology, but much like a music album, an anthology has to be structured in a specific way to maximise the audience’s interest. This was not the case with “X3”. It felt haphazard and loose, as I went from a high to a low. Perhaps Saunders intended for the anthology to read like a rollercoaster? It’s possible, not wise in my opinion, but possible.

The anthology was fun to read. I think Saunders’ dark humour played a role here and he managed to save several of the shorts by using the gallows’ humour literary mechanism. Technically, some of the shorts were ravaged by editorial oversights, e.g. “twist in the tail” instead of “twist in the tale”. Malapropisms shouldn’t be left untreated as they can easily infect a literary wound. However, for the sake of this review, I am willing to overlook the technicalities because everything else was written perfectly. Saunders didn’t make many mistakes. His tempo was fluid, his narrative structure was constrained enough to allow the short stories to develop on their own, and his literary mechanisms were used correctly.

Saunders is definitely a great writer with unparalleled potential. His shorts were good enough to make me seek him out when I’m looking for my next read-of-the-day. Imperfection is sometimes more beautiful than perfection. This is true in Saunders’ case.

And the fact that he knows how to truly imbed subtle humour into his work – something most writers are completely unable to do.

More from the Deviant Dolls!

Christian had this idea that you guys might enjoy knowing a few of our favorite things. Maybe he was wrong, but we’re going to tell you anyway. This week, let’s all share our favorite TV show. Some of us have a bit of an addiction to television (that would be me), so this question was pretty tough to answer.

Christian: Kolchak: The Night Stalker. I remember watching re-runs as a kid (the two movies preceding the TV series came out before I was born) and being terrified and captivated in equal measures. It’s about a newspaper reporter, played by Darren McGavin, who investigates inexplicable crimes. It’s probably fair to say this show sparked my twin obsessions with writing and the supernatural. It was never very commercially successful, I think it was cancelled after a single season, but has since attained cult status. Well-deserved, too.