Allister are one of the great forgotten pop punk bands. They had all the tools – cool image, solid musicianship, a great attitude, killer tunes, witty lyrics, tattoos – yet somehow got lost in the shuffle. Don’t get me wrong, they achieved modest commercial success, especially with their Last Stop Suburbia album in 2002, and cemented their place in pop punk folklore long ago (lest we forget they were one of the first bands signed to legendary label Drive-Thru records, also home to Senses Fail, Something Corporate, Newfound Glory, Halifax and Finch, to name just a few) but the big time always eluded them. In most places, anyway. Allister, and in particular bassist and singer Scott Murphy who for a long time sustained a solo career (I think he still does), was absolutely huge in Japan. No doubt a talented individual, Murphy’s charisma and boundless enthusiasm is admirable. I met him at a gig in London a few years back, and he was awesome. 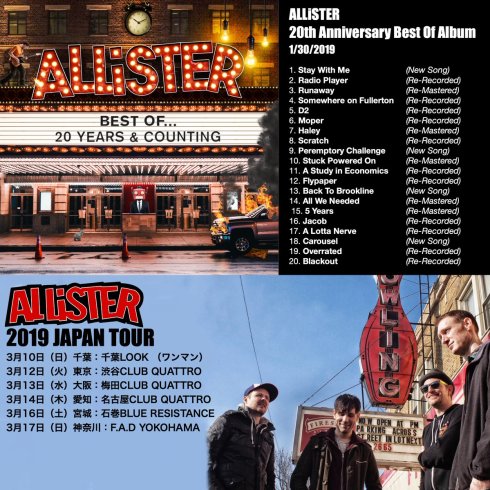 This album comes through necessity more than anything. They haven’t released anything since 2012 and wanted to mark what is essentially their 25th anniversary as a band, and 20 years since the release of their debut album which, incidentally, was recorded on a purported production budget of $700 and featured a cover of the Fraggle Rock theme. Kudos. Someone somewhere suggested a ‘greatest hits’ style compilation, but that proved problematic as it turned out Allister didn’t actually own the recording licenses for any of the tracks on their first few releases but owned the rights to the songs themselves. Hence, the solution was to re-record, and in some cases, ‘re-imagine’ them, and pad the thing out with a few new tracks. The pick of these is probably the high-octane Peremptory Challenge, ran a close second by the slightly more restrained opener Stay with Me.

As for the re-recorded tracks, most have been updated only in the sense that they’ve lost a lot of that energetic immediacy so prevalent in pop punk circles. The guitars are choppier, the bass section slightly higher in the mix, and most tracks have been brought down an octave or two in an effort, you feel, to ingratiate them with a mainstream audience who are rapidly forgetting what drums and guitars sound like, let alone pop punk. Some, like Moper and Flypaper benefit from this treatment, but others like Scratch and A Study in Economics seem to lose a little something. Or maybe I’m just too attached to the original versions and resistant to change. Dunno. Regardless, even at 50% capacity Scratch is approximately 50% better than 90% of other songs.

One of the biggest missteps is a wholly unnecessary remake of the ska-infused Stuck Powered On from the 2012 album Life Behind Machines. In my humble opinion it was one of the band’s weakest tracks anyway, and the 2019 version adds nothing to the original. Meh. All things considered, 20 Years and Counting is a somewhat patchy affair, but has enough quality to carry it through. Beyond the new material seasoned fans are unlikely to be overly impressed, but if this release exposes Allister to a new generation, it will have done its job.

To promote the release the band have made a cool new video for Somewhere Down on Fullerton, which you can catch HERE.

Greetings! I am excited to announce the imminent release of my next project. And this is a BIG one. Details to follow soon, but in the meantime I wanted to give you a sneak preview of the stonking new cover art designed by the ludicrously talented Greg Chapman.

What do you think?

The ebook is available for pre-order, and through some strange quirk of fate, the paperback is out now.

South Korea have done quite well off the back of the whole J-Horror explosion, making several good additions to the wider Asian horror genre. Among the standouts have been Don’t Click (2012), I Saw the Devil (2010), Thirst (2009), and the Wailing (2016). What really put South Korea on the map, however, was Train to Busan. This is one of the more recent examples in the #RetView series, only premiering at the 2016 Cannes Film Festival. I generally lean toward movies more than a decade old, and I only make exceptions in special cases. Train to Busan is certainly one of those. It went on to be nominated for a slew of awards, even winning a couple, filled theaters, and became a surprise hit all over the world. Sold.

The film starts predictably enough with a ‘minor leak’ at a biochemical facility. Always a concern. You know the situation isn’t going to improve from there. It certainly doesn’t improve much for a deer we see mown down by a truck driver. But don’t worry, no animals were harmed in the making of this movie because the very dead, very milky-eyed buck is soon back up on its feet. This prologue gives enough clues as to what’s happening, and going to happen, that you don’t even have to turn on the subtitles if you don’t want to. Oblivious to the zombified deer, Seok-woo (Yoo), a divorced workaholic fund manager, is asking his disinterested colleagues what to buy his young daughter, Su-an (really Su-an) for her birthday. Apparently, he has a ton of money but is low on parenting skills. It’s eventually decided that for her birthday, all Su-an wants is to visit her mother in Busan (South Korea’s so-called second city, putting it on a par with Birmingham, I guess). Seok-woo reluctantly agrees, and they board a train at Seoul station with a random assortment of other passengers including a tough, working class husband and his heavily-pregnant wife, a nasty, self-centered CEO, and a baseball team who, luckily enough, have brought their bats. They’re going to need them.

As the train departs the station we see a young woman with a wound to her leg convulsing who then turns into a zombie. The virus quickly spreads throughout the train, and indeed the country, one memorable scene showing the (so far) unaffected glued to their smartphones watching news reports and footage uploaded onto social media. From there, the film turns into a survival horror as the survivors not only have to protect themselves from the zombies trapped on the train with them, but also those on the outside as everywhere they stop seems to be overrun.

An interesting point comes in the first third when the snarling, blood crazed zombies storm through the train. The few citizens who are left lock the doors of the carriages, and for a few moments we see that the only thing separating the people from the zombie hordes is a sheet of glass. The contrast is stark. They are so close together, yet so far apart. I couldn’t help wondering if this was a handy metaphor not just for rich and poor, but for North and South Korea. In fact, you could go one step further and see the mindless zombies as representing the creeping threat of communism as a whole. Zombies have always been good for metaphors.

On paper it’s hard to explain what makes Train to Busan so good. You can point to certain elements like the cinematography and the musical score, which certainly contribute, along with the fine acting and superb special effects. But I think the one thing that sets it apart from most other zombie movies, and most other movies period, is its energy and vitality. And I do realize how ironic that might sound when talking about the undead who generally speaking, apart from the 28 films, aren’t exactly renowned for their energy or vitality. Despite the bulk of the action being confined to a couple of train carriages, director Yeon Sang-ho, who made his name in animation, does a superb job of picking you up and sweeping you along with the flow. It’s icky and claustrophobic, but only when it has to be and more by design than necessity. There is gore a-plenty, but a strong sense of morality pervades with an even mix of good guys and bad guys, and lot of fun to be had, too. Word is that the movie is currently being remade in English by Gaumont. Because apparently, what the world needs right now is yet another English-language zombie film.

Shortly after Train to Busan dropped, an animated prequel, written and directed by Yeon Sang-ho was released. Featuring an entirely new cast of characters, Seoul Station explains how a homeless man was the source of the infection. Not the deer, then. Seoul Station currently boasts a 100% approval rating on review aggregate site Rotten Tomatoes.

Northshore – For What It’s Worth EP

Northshore are a new five-piece from North East England. One would imagine, somewhere on the coast. Their genre is difficult to pin down, but on this evidence generally leans toward melodic rock, a place where a traditional meaty twin-guitar and proper drum sound is tempered by some well-aimed pop sensibilities and held together with some classic hooks, big choruses and soaring vocals. Think Amber Pacific on steroids.

This is Northshore’s second EP, following 2017’s well-received Alternative Futures. Since that release they’ve been busy touring with everyone from Safeguard to Mallory Knox, which is what every self-respecting rock band should be doing, now more than ever. They are doing it the hard way, and for that alone they deserve all the plaudits they get. The accompanying press release says the entire EP was recorded in the singer’s flat, not that you’d realize as the whole thing is immaculately-produced and covered in a slick, professional sheen.

Released on 15th February and available for pre-order now, For What It’s Worth is a strong 6-track affair kicking off with the sublime Be Heard, a catchy song with crushing riff and a deep social message about mental health. Dependence, which seems to me to be more about love than bad habits, chugs along nicely but unremarkably, until the midway point when a rhythm guitar and cymbal breakdown gives it a whole new dimension. That’s a hallmark of a band maturing, as are the lyrics which don’t simply focus on lightweight party anthems but tackle a range of real-world problems from depression to relationship break-ups and the struggle to find one’s identity in an ever-shifting climate. The second single from the EP, Shedding Skin, a duet with YouTube sensation Christina Rotondo, is a decent tune but just doesn’t work for me. It treads some familiar ground but the main problem is that all-too often, the guest vocalist performs in an almost identical range to regular singer Ben Vickers. The two voices aim to complement each other rather than contrast, which probably would have been both more conventional and effective. Track three, which is the title track, lead single, and centrepiece of the EP, keep up the pace (check out the accompanying video here), before everything slows down a tad for Summer. In the beginning, anyway. The EP’s longest track clocking in at 5.28 is held back for last. Conspiracy is a definite slow-burner, but on repeated listens proves to be one of the highlights. All in all, this is another step in the right direction from a young band making all the right noises.

If you’re looking to discover some new rock, you could do a lot worse than give Northshore a shot. They deserve it.

Thanks to Helen Marvell @ Haulix for the preview.