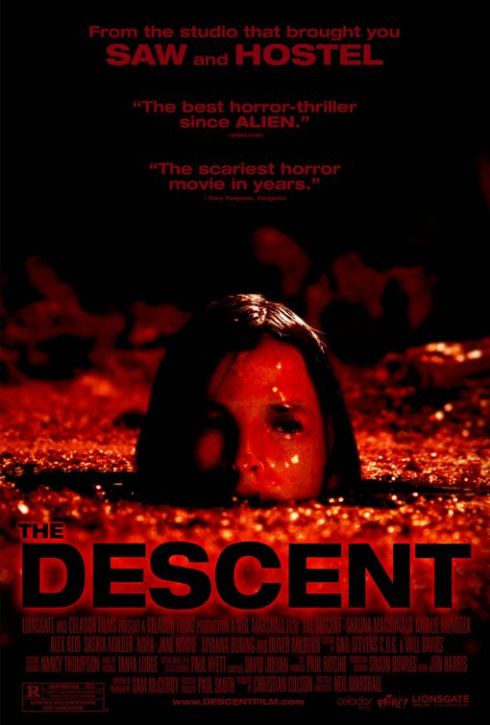 Following the runaway success of Dog Soldiers, British director Neil Marshall was inundated with offers to make films in a similar vein. Anxious not to be typecast, he was initially reluctant but finally agreed to make The Descent because the two projects were, “Very different.” He did, however, insist on making drastic changes to the script to make them even more different. The film was originally to feature a mixed cast, but realizing how common that is, Marshall opted on an all-female cast instead. The decision proved to be a masterstroke, winning the film plaudits and instantly setting it apart from many of its contemporaries. Discussing the film after its release, Marshall says, “We wanted to show all these terrible things in the cave: dark, drowning, claustrophobia. Then, when it couldn’t get any worse, make it worse.”

In a bid to overcome a recent tragedy in which her husband and young daughter are killed, Sarah (MacDonald) meets a group of friends. They decide to go caving together in the Appalachian mountains of North Carolina. Not my idea of a fun time, but ya know. No sooner are they underground, then a cave-in traps them there. Then it transpires that the cave system is unmapped, and that one of their number, Juno (Mendoza) had led them there deliberately so they could become the first people to explore it. This means rescue is impossible, and they are going to have to find their own way out. Whilst seeking a way out they make several discoveries that would indicate that all might not be as it seems, among them cave paintings, a mass of animal bones, and some old climbing equipment. So far, so weird. Things then take a turn for the gross when one of the girls takes a tumble and breaks her leg. I don’t know why open compound fractures (where the bone sticks out of the shattered limb) are so common in movies, but they are and the rest of us have to stomach them. While the rest of the girls are debating how to get themselves out of this mess, Sarah spies a pale, humanoid creature drinking from a subterranean pond. This, my friends, is our first glimpse of a ‘Crawler.’ Hideously deformed, carnivorous, cave-dwelling creatures who were once people, we are led to believe, but have been underground for so long they have mutated and evolved differently to the rest of us. Blind, they have enhanced senses of hearing and smell to compensate. They’re sprightly little fuckers, too. A bit like a cross between the inbreds in the Wrong Turn series and mini-golems. They aren’t very friendly, either, and soon attack our little group of transgressors. Suffice to say, it doesn’t go well for the girls. Juno accidentally stabs Beth (Reid) in the neck and leaves her to die, before later running into Sarah and lying about the whole thing. It is also revealed that Juno had an affair with Sarah’s husband before his death. After a confrontation, Sarah leaves her nemesis at the mercy of the Crawlers and makes good her escape, finding a way out of the cave and back to civilization. Except, in a brilliant twist ending, her ‘escape’ as actually a hallucination, and when she wakes up she’s in just as much trouble as her friends. More, in fact.

Whilst it is set in North America, The Descent was actually made in the UK. The exterior shots were filmed in Scotland, and the interior at Pinewood Studios, as it was deemed too expensive, problematic and risky to film in a real cave system. I don’t know what this says about different audiences, but it is interesting to note here that the US version ends with Sarah’s escape, leaving out the part where she wakes up still strapped in the caves. It was suggested in Entertainment Weekly magazine that this was done because after such an emotionally draining cinematic experience, American audiences wouldn’t appreciate the ‘uber hopeless’ finale. Evidently, however, British audiences prefer their endings to be uber hopeless. The more hopeless and depressing the better. Something else about this film that fucks with your head a little is the depiction of the Crawlers, who count females and vulnerable-yet-still-nasty children amongst their number which obviously means they’ve been multiplying down there. The Descent was followed in 2009 by a sequel, again staring Shauna MacDonald. However, despite having a much bigger budget, this was a comparative failure and struggled to break even.

The film’s marketing campaign in the UK was disrupted by the London bombings of July 2005. Advertisements on the city’s public transport system had included posters carrying the quote, “Outright terror… bold and brilliant,” and depicting a terrified woman screaming in a tunnel. The posters were recalled, and the campaign reworked to exclude the word “terror” from advertised reviews of the movie. The distributor’s marketing chief, Anna Butler, said of the new approach, “We changed tack to concentrate on the women involved all standing together and fighting back. That seemed to chime with the prevailing mood of defiance that set in the weekend after the bombs.”

I write stuff. Pretty much any stuff. My dark fiction has appeared in Asphalt Jungle, Raw Nerve, Roadworks, Dark Valentine, Screams of Terror, Shallow Graves, Fantastic Horror, The Literary Hatchet, Gore and numerous anthologies. My first book, Into the Dragon's Lair – A Supernatural History of Wales was published back in 2003, and I've worked extensively in the freelance journalism industry, contributing features to numerous international publications including Fortean Times, Bizarre, Urban Ink, Loaded, Record Collector, Maxim, and a regular column to the Western Mail newspaper. I lived in China for over five years where I taught English during my search for enlightenment, before moving back to the UK in January 2013 to work as staff writer on Nuts magazine. Later, I was senior writer on Forever Sports magazine and associate editor at Coach magazine, before leaving to chance my arm in the world of pro freelance. In recent times I've devoted more time to dark fiction, my latest releases being Human Waste (Deviant Dolls Publications), Tethered (Terror Tract Publishing) and X4, my fourth anthology of short fiction. I also edit, copy write, proofread and ghost write, and drink far too much craft beer. END_OF_DOCUMENT_TOKEN_TO_BE_REPLACED
This entry was posted on Monday, May 13th, 2019 at 6:20 pm and tagged with C.M. Saunders, classic, Dog Soldiers, film, horror, movie, Neil Marshall, RetView, The Descent and posted in Films, horror, Retro Reviews (RetViews). You can follow any responses to this entry through the RSS 2.0 feed.
« Flame Wars!
What’s in the Dead of Night? »