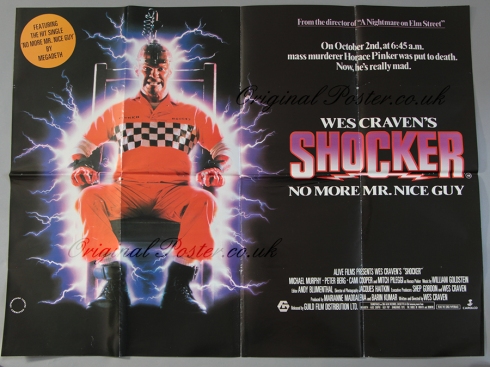 I was 15 when Shocker came out, and so at PAA (Peak Appreciation Age) for horror movies. And a lot of other things, including heavy metal. One of the most attractive things for me about this movie was the soundtrack, which featured Megadeth covering Alice Cooper’s No More Mr. Nice Guy alongside songs by Bonfire and Iggy Pop. Most impressively, the title track was recorded by The Dudes of Wrath, a supergroup consisting of Paul Stanley (Kiss), Vivian Campbell and Rudy Sarzo (Whitesnake) and Tommy Lee (Motley Crue). It even featured powerhouse songwriter Desmond Child and members of Van Halen on backing vocals. All this considered, Shocker was a perfect storm of my two main obsessions coming together. Metal and horror. Although dubbed a critical and commercial failure at the time (though not really, as it raked in $16.6 million at the Box Office against a $5 million budget) it has since gained cult status, and deservedly so.

Parallels are often drawn between Shocker and Wes Craven’s seminal A Nightmare on Elm Street franchise. While the former is much more light-hearted, often venturing into campy horror comedy territory, there are similarities. In his 2004 book Wes Craven: The Art of Horror, writer John Kenneth Muir says, “Shocker was basically Craven’s response to the Freddy Krueger film series and to Universal Studios, which informed him they wanted their very own horror franchise à la A Nightmare on Elm Street. Accordingly, moments in Shocker echo Craven’s earlier milestone film. Both films open with grisly serial killers working in their den of evil, both feature non-believing parents who also happen to serve on the local police, and both films also dramatize the now-expected ‘rubber reality’ dream sequences.”

In Shocker, the Freddy Krueger role is taken by a new anti-hero, Horace Pinker (Pileggi, later to make it big as Walter Skinner in the X Files) who appears to highschool footballer Jonathan Parker (Berg) in his dreams. This proves to be nothing but a precursor, when Horace (isn’t it more endearing when savage comic villains are referred to by their first name? Freddy, Jason, etc) then butchers most of Jonathan’s foster family, much to the chagrin of his police detective foster dad (Murphy). Using his dreams, Jonathan leads a police squad right to Horace’s door, but the killer escapes, brutally murdering all the cops in the process (except his foster dad, who yells at him). He then kills Peter’s girlfriend in revenge (Langenkamp, from A Nightmare on Elm Street. Obviously a favourite of Craven’s, she was also cast in A Nightmare on Elm Street 3: Dream Warriors and Wes Craven’s New Nightmare). Shortly afterwards, he is finally apprehended and it transpires that he is actually Peter’s biological father (bummer!). He is then sent to the electric chair. What his executioners don’t know, however, is that Horace has struck a deal with the devil. The chair doesn’t actually kill him, but ‘frees’ him and turns him into pure electricity, enabling him to continue his killing spree by hopping from body to body. Jonathan eventually wins through, with the help of his dead girlfriend, by trapping his nemesis dad inside a television set leaving the path open for a sequel. The much-touted sequel, which was supposed to be the second instalment in a horror franchise to rival A Nightmare on Elm Street and Friday 13th never materialized, probably due to a combination of mixed reviews and shifting audience attitudes.

Some critics disagree, with Horrornews.net going so far as to call him ‘lame’ but IMHO Pileggi plays a remarkably convincing baddie, and with his bald head and trim physique is eerily reminiscent of a young Dana White. He does suffer a little from ‘Freddy Krueger Syndrome’ with all the banter and wisecracks (“C’mon boy, let’s take a ride in my volts wagon!”). However, despite its cult classic status, this film is not without its problems. One of the main sticking points is its length. At 110 minutes, it far exceeds the average 90 minute running time for this kind of genre staple and takes quite a while before it gets going. I blame the editors for that. Maybe a slightly shorter, more streamlined version would have fared better.

According to Craven, the film was severely cut for an R (15) rating. It took around thirteen submissions to the MPAA before it was awarded an R instead of an X (18) which would have limited its appeal. Some of the scenes that were cut included Pinker spitting out fingers that he bit off of a prison guard and a longer and more graphic electrocution. An uncut version has never been released.

I know what you’re thinking. Internet etiquette? It’s the internet, there is no etiquette.

But see, you would be wrong.

Because everything you post online, every snide comment, scathing retort, and misquided or misunderstood witticism, is there for all the world to see and it stays there until you delete it. And even then there are ways to get it back, or so I’m told.

This means that past, present and future friends, colleagues, partners and employers can all see how you interact with people, and what kind of person lurks behind that cool exterior. Oh, and you can add the government to that list. Not just yours, but more than likely several, and even your great aunty Zelda. You didn’t think she used Facebook? Best think again. Even regular Joe’s who you don’t notice lurking online and don’t give much of a shit about anyway can pose a threat.

The DO’s are quite simple: DO use the Internet however you see fit, DO surf to your heart’s content, DO find some of its hidden corners, DO look up those old friends and flames, and DO find new ones. In short, have a blast. Just be aware of a few DON’T’s.

By the way, this (non-exhaustive) list is aimed primarily at indie writers and other internet marketers, but with a little improvisation, can be applied to just about anyone’s daily life. It is designed to help, not hinder.

DON’T send book links, or any other promotional material, in the form of direct messages. This topic is particularly prickly amongst the Twitteratti. They fucking hate it.

DON’T tag people in political posts or rants about Lady Gaga, football, the environment, the refugee crisis, veganism, or anything else that could be construed as even vaguely divisive or controversial. The post likely reflects YOUR opinion, not that of the people you are tagging, and by tagging them you are associating them with your views against their will.

DON’T add people to groups without their permission, even if you think you’re doing them a favour. Just don’t.

When commenting on other people’s threads, DON’T see that as an opportunity to drop your book link. That, my friend, is spam, and it tastes like shit.

Similarly, when people ask for book recommendations, DON’T recommend your own book. Show some humility, you pretentious asshole.

Listen, I get that some people just aren’t very savvy. They might mean well, and just don’t know what they are doing is annoying the shit out of people. But the vast majority of social network users know exactly what they are doing. They know they are taking liberties and being annoying. They just don’t care. That’s just disrespectful.

Do yourself a favour, follow these unwritten rules, and make social networking less painful and awkward for the people who know you.