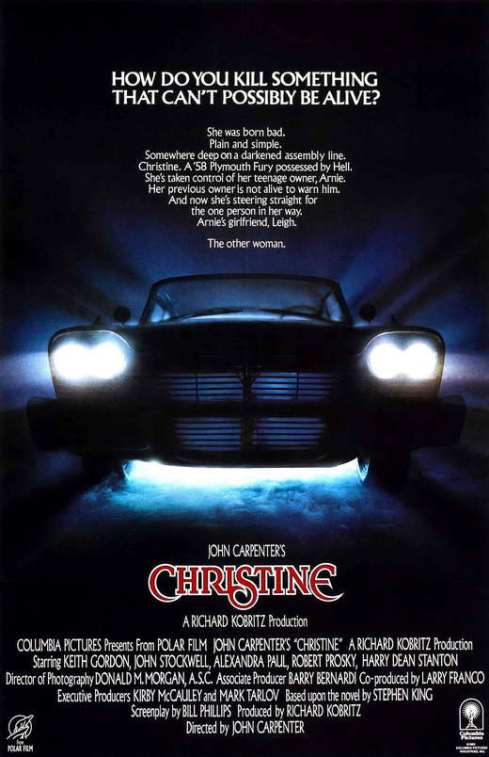 A major reason behind this series of posts is to look at movies that had an impact on my childhood and adolescence not just from a whimsical, rose-tinted view, but through the cold, hard, unimpressed eyes of an adult to ascertain how the films stand up and how my perceptions have changed. From that perspective Christine, the second Stephen King adaptation I have looked at following Thinner, is perfect fodder. I was in my early teens when I first read the book, which was released the same year as the film (unusual in itself, as the journey from publication to silver screen is usually a lot longer) and I think I saw the movie around the same time. Both are shot-through with nostalgia, and though set in the late 1970’s, feel as if they could have been placed in a much earlier time. This is perhaps a result of Christine’s radio being permanently tuned into 1950’s, the era she was manufactured (or ‘born’) rock n’ roll. In many ways, both the book and the movie also capture the angst and confusion of being a teenager, which often goes hand-in-hand with the thrills and naked optimism. All of which is testament to King’s sublime storytelling. Something else that comes through loud and clear is how intrinsic cars and driving is to American teen culture. It’s probably important to most teenagers, wherever they are from. Obviously, cars represent freedom. But they mean so much more in America.

It’s unlikely that any of this would be so prevalent had it not been for the direction of John Carpenter, who had been exploring the horror/suspense genre ever since 1978’s classic Halloween, most impressively on The Fog (1980), Escape from New York (1981) and the Thing (1982), a run he continued with Christine. His trademark sinister musical score, on this occasion cut with rock n’ roll classics, is a permanent reminder of his involvement, but his influence is immediately apparent during the opening credits, which roll over the sound of a throbbing engine. Overall, Carpenter brings a kind of savage warmth to proceedings, which is surprising as in later interviews he said the film was more of a ‘job’ than a personal project.

The plot is simple enough, but when you think about it most great plots are. Things are usually only complicated by sprawling, convoluted storylines which you have to concentrate so hard on following, everything else falls by the wayside. Arnold ‘Arnie’ Cunningham (Gordon) is an unpopular and socially awkward teenager living in the (fictional) town of Rockbridge, California. He has only one friend, Dennis (Stockwell). However, things begin to change when he purchases a beaten-up 1958 Plymouth convertible named ‘Christine’ from a used car dealer. He invests all his time and money in the car, and slowly develops a new image, that of a 1950’s greaser, to go with it. He even lands his first girlfriend, Leigh Cabot (Paul). But then things turn ugly. Arnie isn’t the boy he used to be. These days he’s an arrogant dickhead, and when Leigh almost chokes on a hamburger whilst sitting in his prized car, his friend Dennis does some investigating. He discovers that Christine has a long history of death and tragedy tied her. But that can’t be right. It’s only a car. Isn’t it? Dennis’ worst fears are confirmed when, after an altercation, Christine begins to hint down a group of local bullies. As the violence escalates, Arnie is sucked further and further into his now-murderous alter-ego. Is there any way back for him?

As ever, the thing that stands out most in both the book and the film version of Christine is the characterization. You actually feel for the characters, and despite many of the film cast being novices (an attempt, you feel, to portray the fresh innocence of youth) the acting is impressive right across the board. Word is that the role of Arnie was originally offered to Kevin Bacon, who declined it to take his career-defining role in Footloose, which came out the following year. The exception to the novice rule is the casting of grizzled veterans Harry Dean Stanton and Robert Prosky, who are superb as Detective Junkins and Darnell respectively. Producer Richard Kobritz had first been introduced to the work of Stephen King through his involvement on the ‘Salem’s Lot TV mini-series, and in the aftermath of that project was presented with several other novels King wanted to adapt for the screen. Among these novels were Cujo and, of course, Christine.

Because only 5,303 1958 Plymouth Furys were ever made, by the time filming began in April 1983 they were in short supply. Carpenter decided to place ads seeking two other Plymouth models, the Belvedere and the Savoy, and eventually got hold of 24 of them in various states of disrepair. These were then used to build a total of 17 versions of the Fury.

I write stuff. Pretty much any stuff. My dark fiction has appeared in Asphalt Jungle, Raw Nerve, Roadworks, Dark Valentine, Screams of Terror, Shallow Graves, Fantastic Horror, The Literary Hatchet, Gore and numerous anthologies. My first book, Into the Dragon's Lair – A Supernatural History of Wales was published back in 2003, and I've worked extensively in the freelance journalism industry, contributing features to numerous international publications including Fortean Times, Bizarre, Urban Ink, Loaded, Record Collector, Maxim, and a regular column to the Western Mail newspaper. I lived in China for over five years where I taught English during my search for enlightenment, before moving back to the UK in January 2013 to work as staff writer on Nuts magazine. Later, I was senior writer on Forever Sports magazine and associate editor at Coach magazine, before leaving to chance my arm in the world of pro freelance. In recent times I've devoted more time to dark fiction, my latest releases being Human Waste (Deviant Dolls Publications), Tethered (Terror Tract Publishing) and X4, my fourth anthology of short fiction. I also edit, copy write, proofread and ghost write, and drink far too much craft beer. END_OF_DOCUMENT_TOKEN_TO_BE_REPLACED
This entry was posted on Thursday, February 13th, 2020 at 7:16 pm and tagged with cars, Christine, classic, Columbia Pictures, eighties, films, Harry dean Stanton, horror, John Carpenter, movies, RetView, Stephen King and posted in Books, Films, horror, Retro Reviews (RetViews), Reviews. You can follow any responses to this entry through the RSS 2.0 feed.
« 100 Word Horrors 4
X4 Cover reveal! »