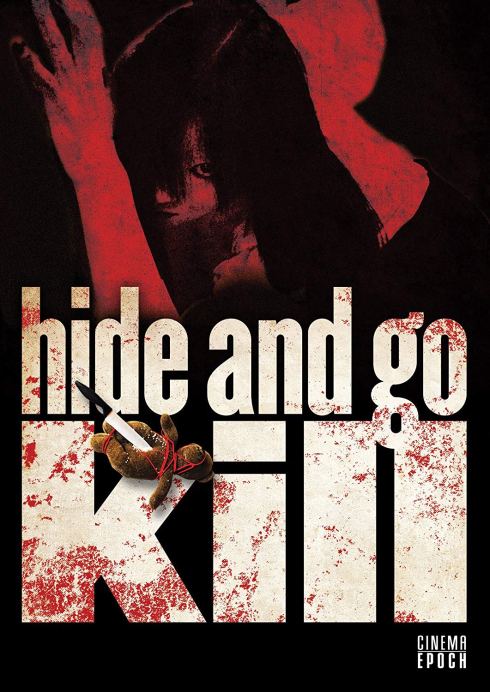 I’ve been quietly obsessed with internet rituals for a few years now, ever since I stumbled across something about the mysterious death of Elisa Lam online. Merging technology and the paranormal, which could be a metaphor for Japanese horror itself, internet rituals (or games) have cropped up in my writing several times, not least in my forthcoming novella Tethered, and Hitori Kakurenbo which translates to ‘hide and seek alone’ and was my contribution to 100 Word Horrors 2. Hide and Go Kill is based on the same ritual. In true urban legend fashion, the details vary between sources but in a nutshell, the instructions are as follows:

Get a doll, remove the stuffing, replace it with rice, throw in some of your blood or nail clippings (gross) then sew it back up with red thread and give it a name. Preferably something good and scary. At 3 am, turn off all the lights but leave on the TV then go to the bathroom, fill a bucket full of water, and place the doll inside. Saying “I see you (name),” stab the doll with a sharp knife, then go and hide. If you manage to perform the ritual correctly, you’ll soon start to experience certain unexplained phenomena like hearing noises from an empty room and then, you guessed it, the doll will come to find you, hence the name ‘hide and seek alone.’ Either that, or you might commit suicide or disappear without trace. Good times had by all!

The movie version opens with one of those simple yet spooky white-on-black introduction sequences consisting of what’s (I think) meant to be an exchange between several people on the comment section a blog, one of whom is explaining that a friend of theirs played hide and seek alone and didn’t come out of it very well. The film proper begins in a Japanese classroom. If you’re a fan of J-Horror as I am, you’ll know that all the best twisted shit starts in Japanese classrooms, and Hide and Go Kill is no different. Here, there’s a girl called Midori (model and actress Yamaguchi) reading a blog on her phone and remembering her absent friend, Fumika, who after being jilted by her lover and bullied at school discovered the Lonely Girl blog and tried repeatedly to persuade Midori to play hide and seek alone (“Fuck the fuck off, Fumika!”). Eventually she succumbs, of course she does. The blog, and by extension, the game, spreads, and the horror takes hold. The film is essentially an anthology of sorts, each segment following a different person’s experience with the common denominator being the blog (poorly translated in the movie as a ‘mobile novel’) and the ritual it pertains to, culminating with the origin story. True, this movie follows a popular template and in places is slightly derivative of certain J-Horror staples, notably Ringu. Also, the subtitles are atrocious.

In a scathing review, BloodyGoodHorror.com  said, “It’s boring. Real boring. Each story also has to show how the characters first learned about this stupid game. In each case, it’s through some text-message released novel called “Lonely Girl”. As described in the film, “Lonely Girl” is so dark and twisted that very few people would read it. Problem is, every single fucking person in the movie reads it. As do all of their friends.”

Well, you know what they say about opinions.

Mine happens to be that while it is far from perfect, Hide and Go Kill isn’t completely without merit. In fact, as a concept it’s pretty damn good. At the time of release over a decade ago it was quite innovative, and it benefits greatly from the general skin-crawling creepiness so often associated with J-horror. Mood. You won’t find much about it online, apart from a few mixed reviews and a very basic IMDB listing. I couldn’t, anyway. Despite spawning a sequel a couple of years later (Hide and Go Kill 2 or, alternatively, Creepy Hide and Seek, which has to be the worst name for a movie ever) it’s almost like the film slipped completely under the radar. However, if by chance you have Amazon Prime you can watch it in full there. Don’t forget to turn on the subtitles, unless you happen to be fluent in Japanese.

Word is that the movie spawned the ritual, rather than the other way around. Clever producers or PR people invented the game and floated it out to popular message boards as a form of guerrilla marketing where it soon took on a life of its own.

Tethered is available for pre-order now on Terror Tract Publishing.

I write stuff. Pretty much any stuff. My dark fiction has appeared in Asphalt Jungle, Raw Nerve, Roadworks, Dark Valentine, Screams of Terror, Shallow Graves, Fantastic Horror, The Literary Hatchet, Gore and numerous anthologies. My first book, Into the Dragon's Lair – A Supernatural History of Wales was published back in 2003, and I've worked extensively in the freelance journalism industry, contributing features to numerous international publications including Fortean Times, Bizarre, Urban Ink, Loaded, Record Collector, Maxim, and a regular column to the Western Mail newspaper. I lived in China for over five years where I taught English during my search for enlightenment, before moving back to the UK in January 2013 to work as staff writer on Nuts magazine. Later, I was senior writer on Forever Sports magazine and associate editor at Coach magazine, before leaving to chance my arm in the world of pro freelance. In recent times I've devoted more time to dark fiction, my latest releases being Human Waste (Deviant Dolls Publications), Tethered (Terror Tract Publishing) and X4, my fourth anthology of short fiction. I also edit, copy write, proofread and ghost write, and drink far too much craft beer. END_OF_DOCUMENT_TOKEN_TO_BE_REPLACED
This entry was posted on Saturday, June 13th, 2020 at 3:58 pm and tagged with Elisa Lam, film, Hide and Go Seek, horror, internet rituals, j-horror, Japan, japanese, movie, RetView and posted in Films, horror, Retro Reviews (RetViews). You can follow any responses to this entry through the RSS 2.0 feed.
« Burnt Fur
The Alarm – Stream (Hurricane of Change) (review) »