Like most other people, I am struggling to take any positives from 2020. One positive, however, is the fact that I’ve had more time to reassess things, and tackle some of those jobs I’ve been putting off. One of those jobs was revising my novel, Sker House, my attempt at the ‘Great Welsh Haunted House Story.’

I worked on it sporadically for five or six years, mainly because there was so much research involved because I wanted it to be as factually accurate as possible. Sker House, and many of the places I talk about in the book, are real, and so are some of the local legends I reference including that of Kenfig Pool and the Maid of Sker. Well, they are at least as ‘real’ as legends can be, anyway. The book also incorporates some documented historical events, like the awful practice of wrecking and the Mumbles Lifeboat Disaster, which didn’t actually happen in Mumbles, but here at Sker Point.

In 2016 I got to a point where I was just done with Sker House. I was so desperate to get it out there, I forewent the process of looking for a traditional publisher, commissioned my old mate Greg Chapman to design a cover (based on an old postcard I found of the original Sker House) and decided to publish it myself. Or more accurately, via a now-defunct writer’s collective I was then part of.

Though it became my biggest selling book and picked up some great reviews, truth be told, I’ve never been 100% happy with the version of Sker House I originally put out. The plot was a bit meandering and unfocused in places, and I slipped into using the passive voice a bit too much. The back end of the book felt a bit rushed, and there were a few silly grammatical errors and the odd missing apostrophe or comma. In places I forgot I was writing for an international audience, and referenced things like the Dissolution of the Monastries without actually saying what it was, or what the implications were and how it tied in with the story. From a more practical standpoint, the formatting was also a bit wayward. I was still learning the ropes then and experimenting with different techniques and software.

Some things seem fine the first dozen times you read them, but if you go back and read them a thirteenth time years later you’ll probably find some things you’d like to change. The beauty of self-publishing, apart from maintaining complete creative control, is that you can do just that. During this re-write I also added 4,000 words or so to the original. I’m not sure how that happened because my intention was to do the opposite, but there you go.

Helped largely by a succesful Bookbub promotion, the first edition is my biggest selling book which means a lot of my readers already have it. If you’re one of the few thousand who are in possession of the original (now substandard) version, get in touch and I’ll send you a free copy of the 2020 remaster.

If you still haven’t visited Sker House, why not take advantage of the special relaunch offer I’m running and do so now? It shouldn’t need saying, but THIS INVITATION APPLIES TO THE BOOK ONLY. NOT THE ACTUAL HOUSE.

I said something similar before and got a solicitor’s letter from the house’s current owner. I don’t want that to happen again.

The revamped, revised, rewritten, and remixed Sker House is available on ebook and paperback.

Before Scanners, Videodrome, and the 1986 remake of The Fly made Canadian writer and director David Cronenberg a household name, came this comparatively little-known cult classic. Despite the implications of the title, Rabid has nothing to do with sick animals, and everything to do with a woman who undergoes experimental surgery and spontaneously develops a strange penis-shaped appendage under her armpit. This instrument, though, isn’t for fun, it’s for sucking blood and spreading disease. Hence the ‘rabid’ of the title. Okay, I guess some more information is required.

Rose, played by porn star Marilyn Chambers in her first attempt at a ‘serious’ role, is riding pillion on a motorcycle driven, not very well, by her boyfriend Hart (Moore), when they take a nasty tumble. They both survive, but find themselves in a clandestine plastic surgery clinic overseen by the slightly creepy Dr Dan Keloid (Ryshpan) who decides to perform radical new surgery on the comatose Rose, who is the more badly injured. When Rose finally awakens from her coma, she inadvertently injures a fellow patient. It is then revealed that Dr Keloid’s experimental procedures have caused a mutation in Rose’s body, leaving her able to subsist only on human blood. Furthermore, anyone she takes blood from soon morphs into deranged, murderous zombie-like creatures, which isn’t really ideal for anyone. Understandably freaking out, Rose discharges herself from the hospital (but not before causing some more mayhem) and sets off on a cross-country hitchhiking trip whilst the police and medical fraternity try desperately to apprehend her in the face of a swelling epidemic. With the situation now out of control, a state of martial law is declared in Montreal whilst an array of scientists and doctors work feverishly to develop a cure.

Sure, as many films of this era were, Rabid is camp as hell in places and it takes a while to get going, but there is a lot to admire here. Not least the performance of Chambers, who plays the role of Rose with clarity and impressive depth. Her transition to mainstream movies, however, ultimately failed and she was back in the porn industry several years later amid claims she’d been ‘blackballed’ by Hollywood. Tragically, on 12th April 2009 she was found dead by her 17-year old daughter the cause of death determined to be a cerebral haemorrhage and aneurysm linked to heart disease. She was 56. In hindsight, it’s highly likely that Cronenberg cast her largely because of her porn background, rather than in spite of it. There is a raw sexuality bubbling beneath the surface throughout, from the penis thing growing out of Rose’s armpit to the almost orgasmic reaction she has when she feeds. Some of the special effects aren’t so special, but Rabid benefits from a cohesive narrative and a solid plot, something missing from a few more lauded Cronenberg movies. The bleak ending also sticks in the mind, which I won’t spoil for you here. When it was released, most of the Western world was being swept away on a tide of spit, vehemence and punk music, and some of that attitude bleeds through into the movie which when viewed in retrospect seems to portray Rose as a vulnerable, even unwilling, catalyst for change.

Rabid is seen by many Cronenberg aficionados to be inexorably linked with his 1975 offering Shivers and true, the two films do share many similarities. The Den of Geek website points out that if Shivers represented Cronenberg’s brief foray into zombie territory, Rabid can be seen as a tentative exploration of the vampire genre, if only for the blood sucking. There has been no shortage of discussion about Rabid in the forty-something years since its release, with the overriding opinion being that whilst it fades into mediocrity when compared to some of his later work, it marks an important junction in the then-fledgling writer/director’s career. A largely-faithful remake directed and co-written by Jen and Silvia Soska and starring Laura Vandervoort premiered at the London Frightfest Festival on August 26th 2019.

Cronenberg has stated that he originally wanted the sassy Sissy Spacek to play the lead, but the studio vetoed his choice because of her accent. Okay, then. Interestingly, Carrie, Spacek’s tour de force, was released during the production of Rabid, and a poster can be seen when Marilyn Chambers, Spacek’s eventual replacement for this role, walks past a movie theatre.

My short story Holiday of a Lifetime is included in the Splatterclub’s first anthology, out now on Blood Bound Books. BBB, who have previously published my stories The Devil & Jim Rosenthal in DOA, Subject #270374 in DOA III, and The Others in Burnt Fur, are without doubt one of my favourite small presses. It is always a pleasure to work with them, and I’m overjoyed to continue our association. 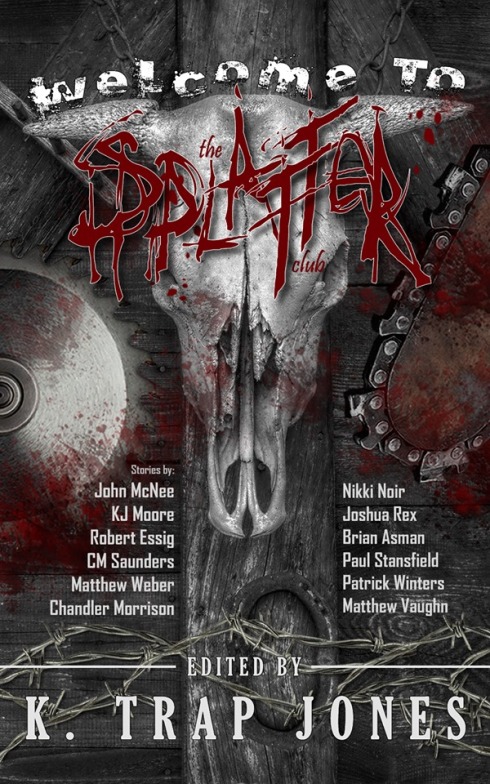 I wrote Holiday of a Lifetime in 2017, shortly after I came back from a trip to Thailand. While not quite the holiday of a lifetime, it came close. What it really did was open my eyes to some of the decadence and debauchery that goes on there on a daily basis. I thought Ibiza and Benidorm were bad (or good, depending on how you look at it) but nothing could prepare me for Bangkok and Pattaya.

Holiday of a Lifetime is about an Average Joe who, after being made redundant, decides to take his wife on a trip to Thailand. There, the couple let themselves go and indulge in everything the country has to offer. In fact, they let themselves go too far and come to realize that when something is done, it can’t be undone.

I honestly thought I’d overplayed my hand with this one. Blood, gore, extreme sex, sexual violence, it’s all here. I didn’t think I would be able to find a publisher willing to touch it, so kudos to BBB.

My mother is usually my biggest fan. She reads everything I have published. But I don’t think she’ll be reading this one.

Welcome to the Splatterclub is out now on paperback and ebook.