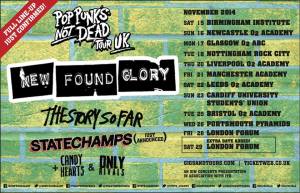 Here it is. The final night of the 2014 Pop Punk Not Dead Tour. The only UK representatives on the bill, Dublin’s Only Rivals, are more grungy alt rock than pop punk, and taking the stage just after 6:30 didn’t help their cause. Still, they are a tight unit and have some decent tunes. Their new EP, Details is out now.

On the other hand, the Candy Hearts embody what pop punk is all about. As the name suggests, sugar sweet melodies and killer hooks combine with emotionally-heavy lyrics sung with gusto by Mariel Loveland to great effect. Most of the short set was taken from this years ‘All the Ways You Let Me Down’ album, probably their strongest to date.

State Champs were up next, showcasing tunes from last year’s debut full-length ‘The Finer Thing.’ If you missed it, that’s a great album, and they hit all the right notes live. Polished and fluid, and with some good crowd interaction, the New York 5-piece made more than a few new friends tonight and ensured that pop punk certainly is not dead.

Main support The Story So Far have been around a long time now, and have amassed a healthy body of work to call upon. Live they are technically flawless, and perhaps the only thing missing from their repertoire is the presence of a couple of killer singles that might threaten the charts. They closed their 10-song set with High Regard, possibly the closest thing they have, apart from Small Talk, which they didn’t even play. Still, if this is the story so far, its pretty fucking impressive.

This being the last night of the tour, many in attendance were expecting something special and headliners New Found Glory didn’t disappoint. In fairness, they rarely do. Even after almost 18 years together and eight studio albums, they still give each performance everything and play every show like it could be their last. After a slightly surreal intro tape they ripped straight into Understatement, lead track from arguably one of their best-loved albums Sticks and Stones. After that, the classics kept on coming, Better Off Dead, Hit or Miss, Don’t Let Her Pull You Down, Failure’s Not Flattering, Dressed to Kill, Truck Stop Blues, and, of course, My Friends Over You, mixed with a few stand-out tracks from most recent album Resurrection.

During his between-song banter, guitarist Chad Gilbert said the concept of the new album was based on finding that inner strength and belief that helps you triumph in the face of adversity. Anyone who knows the back story of NFG, and in particular the scandal that broke last year surrounding ex-member Steve Klein, will know what he was alluding to. Another thing Gilbert said in one of his between-song raps that stuck with me was that life isn’t about chasing fame, money or success, its about making memories. He’s probably right about that because in the end, memories will be all any of us are left with and if that’s the case we made some good ones tonight. Cheers boys.