The Corona Book of Ghost Stories

I am pleased to report that my 6th short story of the year, Where a Town Once Stood, has been included in the Corona Book of Ghost Stories on Corona Books, UK-based independent publishers of the “brilliant, innovative and quirky.”

I’m not sure which category Where a Town Once Stood belongs, probably the third one. It’s a pretty straight-forward ghost story with a dash of social commentary based on a period of my life when I was trying to break into journalism. I was still working full-time in a packing factory, so I did a few voluntary shifts at a local newspaper called the Merthyr Express in my spare time. I just wanted to see what went on behind the scenes at a newspaper. Suffice to say it wasn’t exactly Fleet Street. In fact, it was far more boring than I thought possible, and while I sat in the office fielding phone calls about fetes and community meetings I yearned for something exciting to happen. A real-life ghost story would have been the dream, but there were times when I would have settled for a giant cucumber story.

Reading it now, Where a Town Once Stood would be a perfect addition to my series of stories set in the fictional Welsh village of Wood Forge. For some reason however, I named the village Tref y Meirw which (I think) means ‘Town of the Dead’ in Welsh.

A little private joke there.

By the way, to give credit where it’s due, I appropriated the title Where a Town Once Stood from an Alarm song about the decline of post-industrial Wales from the seminal album Change.

Check out the ToC: 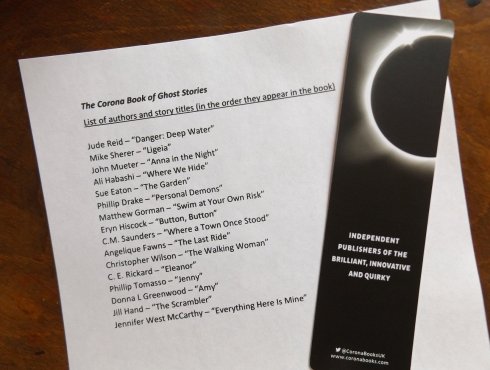 The Corona Book of Ghost Stories is out now.