You Don’t Always Have to Start at the Beginning.

I have written about some aspects of writing on this blog before, most recently writer’s block and indie publishing and do so occasionally for various publications like Writer’s Weekly and Funds for Writers. But thinking about it, the reason I don’t do it more is because writing is such a subjective topic that it’s very difficult to impart any actual bona fide wisdom. What works for you, might not work for anyone else. I can give an opinion, sure. Maybe even an informed opinion. But at the end of the day, it’s still just an opinion, and as the saying goes, opinions are like assholes. Everybody has one. You like the way yours smells, but everyone else’s stinks.

Anyway, from an altruistic point of view, I probably should blog more about writing and publishing in the hope that someone somewhere might take something from it. So today I’d like to address what I see as one of many rookie errors, and that is the assumption that when writing a story, a novel, a novella, or even a feature or article, you have to start at the beginning and work diligently through to the end.

That’s right. You can start in the middle if you want. Fuck it. If you have a killer final scene, write that first then work backwards. Obviously, I don’t mean write the words backwards. I’ve never tried it, but I imagine that would not only be ridiculously taxing, but satanic as fuck. Plus, editors won’t appreciate it.

It genuinely amazes me how many people start a writing project full of optimism and the very best of intentions, only to grind to a shuddering halt for some reason, abandon the project, then just moan about how hard it was instead. It’s easy to blame writer’s block but c’mon, you know that’s just an excuse. My advice is, if you are struggling with a particular scene, or have some plot issues to work through, or have plain hit the wall, just pick up the story at a later point (on the other side of said wall) and continue from there. When it’s finished nobody will even notice, much less care.

For example, imagine you are writing a murder mystery and the victim has just been found dead in the kitchen with their own intestines stuffed in their mouth. Maybe you aren’t sure about the order of events leading up to the murder, or the weapon used, or what day of the week it was, or even who the killer is. Maybe you can’t decide on the time frame, motive, or any number of other technicalities. Don’t sweat it, just let the story hang there for a while and move to another section. Believe me, sooner or later things will fall into place.

Personally, I often start short stories with little more than a single scene in my head, then I write around the scene. If I’m lucky, I’ll have several semi-related scenes floating around. Then it’s just a matter of stitching them together. Sometimes the initial scene doesn’t even make a final cut. It’s there as kind of a sign post or marker, and when it has served its purpose I might pull it and throw it away, or use it in another story.

How you write is up to you. That’s the beauty of it. You are the master, and the page is your domain. Own it. The important thing is the end result. The story. How you arrive at the destination is irrelevant. You don’t always have to follow convention, and you certainly don’t always have to start at the beginning. 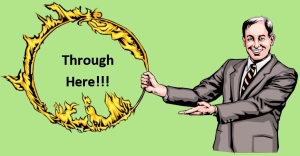 As a jobbing freelance writer, I’m a self-confessed media whore. I’ll write for whoever pays me. It’s what I have to do. I make a living through a number of channels, one of those channels being dark fiction. Dark fiction with a twist of sardonic humour, as reviewers often point out. I’m not going to lie. I don’t make a lot of money from it. I sell a few books a month, and place a couple of short stories a year in various magazines, ezines, literary journals and anthologies. It’s never going to make me rich. But I enjoy it, and I count myself lucky that I am in a position to make a little extra income to supplement my day job writing for sport and lifestyle magazines.

In order to have your work published in one of the many outlets there are, you have to submit your work according to the publication’s specific formatting guidelines. Some want a particular font, in a particular size, some want single-spaced copy, others double-spaced. Some request a cover page with your name and contact details, while others want ‘blind’ submissions with no identifying information. About the only thing all publications have in common, is that they all want something different. I don’t mind going through every individual story I have and changing the font or whatever if the potential pay-off makes it worth my while. The more a publication pays contributors, the more I am willing to do. Unfortunately, this is a practice that occurs right across the board, even down to ‘exposure markets’ that don’t pay any actual money. In fact, they are often the worst offenders. I once had an extremely bitchy email from the ‘editor’ of an ezine complaining that I hadn’t followed the guidelines not just in the manuscript I submitted, but also in my cover letter. He took particular offence at my use of the word ‘hi’ instead of the more formal ‘hello,’ and the smiley-face at the end of my email was a deal-breaker. He clearly wasn’t a fan of the friendly approach. When I checked their guidelines again, I saw how much they paid per word. Not a penny. Zero. Nothing. You would think a publication expecting established writers to work for free would be a bit more forgiving, but it served me right. If I’d read the guidelines properly I would have realised they didn’t pay and wouldn’t have submitted to them in the first place.

Anyway, I digress. On the face of it, it all seems like a massive ball ache for no good reason. I was always of the opinion that if a story is reasonably and legibly laid out, what difference does it make if its double-spaced in 12pt courier or not? But then I started thinking about it, and looking at the situation from the point of view of the publication. If a prospective contributor doesn’t pay any attention to the guidelines, why should the publication pay any attention to the prospective contributor?

The publication don’t put all these guidelines in place just for the sake of it (though some probably do take some perverse pleasure out of making you jump through hoops on their behalf). They are a test, designed to ascertain in an instant how closely you read those guidelines. Or if you read them at all. It reminds me of Van Halen and their infamous tour riders. In the decadent 1980’s, when they were among the biggest bands in the world, Dave Lee Roth and co insisted that all the brown M & M’s be removed from bowls backstage at their gigs. Years later, they confessed they weren’t just being pretentious dicks, but making sure the venue adhered to their requests. If they didn’t take care of the small things, they couldn’t be trusted to take care of the big things, either. In retrospect, it all adds up, and maybe these editors are thinking along the same lines.

Check out some of the times I jumped through enough hoops on my Amazon Author page: