Title: The Hound of the Baskervilles 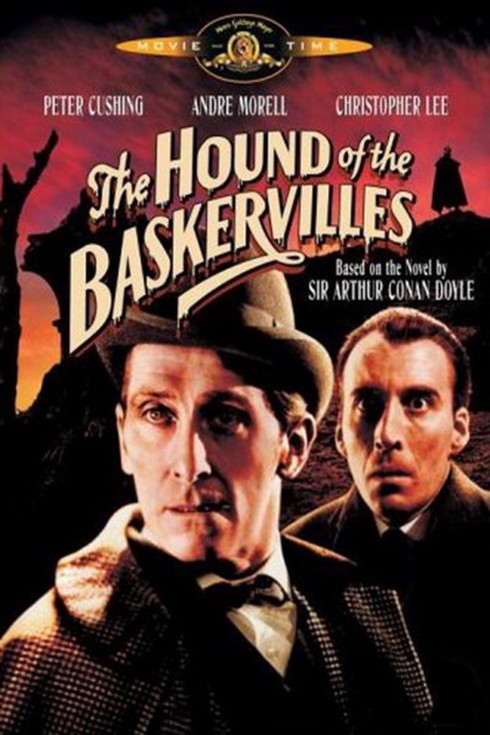 Sit down and buckle up for the second Hammer Horror film in my RetView series, following the trailblazing Witchfinder General. There have been numerous other adaptations of the Hound of the Baskervilles. But even over half a century later, none are as critically acclaimed as this version of the classic gothic horror. Why? Because few cinematic partnerships make the hairs on the back of your neck stand up in quite the same way was Peter Cushing and Christopher Lee do. The quintessential British duo starred together in dozens of films, and became as synonymous with each other as tea and biscuits. Director Terence Fisher (who also directed Dracula, The Curse of Frankenstein,The Mummy, and The Two Faces of Dr. Jeckyll, among ,any others) also deserves credit for his efforts. Add to the mix the fact that this was the first Hound of the Baskervilles adaptation ever to be filmed in colour, and you have a perfect storm of superlative talent, excellent source material, and groundbreaking technological advances which may go some way to explaining this particular film’s cultural impact and enduring popularity.

Given that The Hound of the Baskervilles is one of Sir Arthur Conan Doyle’s best-loved Sherlock Holmes novels first published in serial form in the Strand magazine in 1901-02, the plot itself should require little introduction or explanation. But for those unfamiliar with it, it concerns a Dr Mortimer (de Wolff) who asks Sherlock (Cushing) and his intrepid sidekick Watson (Morell) to investigate the death of his friend Sir Charles Baskerville, who he believes was killed by a huge, bloodthirsty dog prevalent in a family course. Furthermore, he believes the new owner of Baskerville hall, Sir Henry (Lee), is next in line. These fears are confounded when he loses his shoe and a tarantula attacks him. Really. And Dr Watson is assigned to ‘look after’ Sir Henry until Sherlock is good and ready to hook up with them. My favourite character in the whole film is the butler, Barrymore (Le Mesurier, from Dad’s Army). Unfortunately he isn’t there when Watson falls into some quicksand near Baskerville Hall, as you do, but luckily a man named Stapleton and his daughter Cecile are there to save the venerable doctor.

That night, Watson sees a strange light on the moors and goes to investigate with Sir Henry, but after seeing a mysterious figure and hearing the mournful howl of a hound, their escapade is cut short when Sir Henry is taken ill. That mysterious figure is later revealed to be Sherlock himself, who arrived at Baskerville Hall ‘a few hours’ after Dr Watson. For some bizarre reason that is never explained, the enigmatic and eccentric detective then chose to sleep rough, rather than announce his presence. After Sherlock stops acting out, he solves the mystery pretty quickly. The ghostly, mythical Hound of the Baskervilles is a mutt with a mask (at least in the book he is painted with phosphorous paint so he glows in the dark) who is kept in an abandoned mine shaft by Stapleton and his daughter, who turn out to be illegitimate descendants of the original Sir Baskerville and stand to inherit a fortune if the rest of the Baskervilles die.

The climax sees Watson shoot Stapleton, who is then attacked by his own mask-wearing dog. Watson shoots that, too, just for good measure, and Cecile falls into the quick sand (you’d think she’d know where it was by now) and dies a horrible death.

This version of The Hound of the Baskervilles is so well loved that it is one of a very select few to achieve a faultless 100% rating on Rotten Tomatoes. The book is also considered one of Conan Doyle’s best. It was Sherlock Holmes’ first outing in eight years, since his apparent death in The Final Problem, though it is set two years before the events in that story. The inspiration for The Hound of the Baskervilles is believed to have come from the ferocious black dogs of English folklore. Stories concerning these mysterious, red-eyed creatures are widespread and the entity is known by numerous names, the most popular being Black shuck. Devil Dog (not to be confused with hell hounds) is a convenient group name, and they are usually considered to be harbingers of death.

The Baskerville Hall set is the same set that was used for Dracula (1958). The Hound of the Baskervilles also borrowed some music (composed by James Bernard) from the same film.