Where the ‘M’ Comes From

I’ve been doing this writing thing for a while now, and you may have noticed I use different names for different kinds of writing. For academic writing and more formal or serious stuff, I use my full given name because it makes it look as if I know what I’m talking about, even if I don’t. For sport, lifestyle and comedy writing, I use the slightly snappier moniker Chris Saunders. I use a completely unrelated pseudonym for travel writing, mainly because I write about China a lot and they’re touchy about stuff like that. I don’t want to be refused a visa one day. And for fiction, I usually use the name C.M. Saunders . There are practical reasons for doing this. I like to keep different facets of my writing career separate because it’s easier to get my head around. Besides that, the people who read my horror fiction would probably be deeply disappointed if they accidentally picked up one of my travel books, or the one I wrote about Cardiff City FC, and vice versa.

Over the years, a lot of people have asked me why I use C.M. Saunders, especially since I don’t actually have a middle name, and so no middle initial. It’s kind of a happy coincidence that my boyhood nickname was Moony. Because I have a round face, apparently. I guess it could have been a lot worse. There was a boy in my street called Dickhead. Anyway, no. That’s not where the M comes from. It’s not as straightforward as that. But there is a very good reason for it and I’m going to tell you what that reason is.

It’s for my grandfather on my mother’s side. Firstly, he’s probably part of the reason I grew up to be so into the whole horror thing. He was a big reader, and would go to the local library a couple of times a week. This was back when libraries had books. Whenever I went to visit him and my grandmother in his bungalow at the top of the village when I was a kid, he would always have the latest horror novels lying on the table next to his reading chair. I was too young to read them, or even remember much, I just loved looking at those covers. Stephen King, James Herbert, Graham Masterton.

A little word about my granddad, or Pop as we called him. His name was Stanley Martin. Here he is with my gran and my sister in 1982.

And here’s where he lived, New Tredegar, south Wales.

Like my other granddad on my father’s side, he was a coal miner almost all his life. Proper old school Welsh. This is Elliot’s Town colliery, where he used to work. 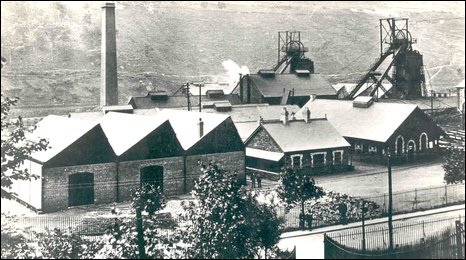 Being a miner was a hard life. He would delight in telling me, my sister, and cousins horror stories. Some were things that really happened to him or his friends, some were local myths or legends, and he probably made the rest up just to entertain us. The man was covered in little blue scars where coal dust had got into his cuts when he was underground, and he was still coughing up black shit twenty years after he was pensioned off. He and my nan Lillian had three daughters, including my mother. All three daughters grew up and got married. As per tradition, when they got married they took the names of their husbands so pretty soon, the Martin name disappeared. I always thought that was a bit sad, and when I started taking fiction a bit more seriously and was looking around for a pseudonym to distinguish it from my journalism, I thought using the ‘M’ initial might be a cool way to keep the name ‘Martin’ alive. Stanley Martin died a long time ago, and when he did his surname died with him. Now, every time I have something published under the name C.M. Saunders, it’s a silent nod to the man who introduced me to horror. If there’s a heaven, I know he’s up there looking down and winking at me.