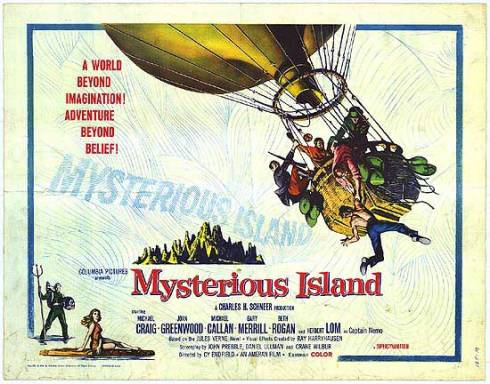 I remember seeing this film one wet afternoon as a kid, and being absolutely captivated by it. It’s the kind of boy’s adventure that just appeals to your sense of boldness and wonder. The original story was written by Jules Verne in 1874, and became an integral part of the so-called Voyages Extraordinaires, a sprawling series of no less than 54 novels published between 1863 and 1905 which included such classics as Journey to the Centre of the Earth and Twenty Thousand Leagues Under the Sea. The book has been adapted at least eight other times over the years, most recently in 2012, but this 1961 version from Columbia Pictures is perhaps the most popular and enduring. It was directed by Cy Endfield, whose career highpoints came when he directed the seminal war film Zulu (1964) and wrote the sequel, Zulu Dawn (1979).

The year is 1865. It’s the height of the American Civil War, and a huge storm sweeps through a Confederate POW camp where a ragtag crew of Union soldiers led by Captain Cyrus Harding (Craig) are planning an escape. Using the storm as cover, they grab a couple of Confederates who were just in the wrong place at the wrong time, pile into an observation balloon (the 19th Century equivalent of a stealth bomber) and make their getaway. The balloon carries them clean across America and over the Pacific Ocean, until another storm strikes and the balloon starts losing gas forcing them to land on, you guessed it, a mysterious island. The escapees quickly regroup and assign roles, with one poor bloke becoming designated ‘vegetable finder’ which must have looked great on his CV. It doesn’t take long before the intrepid group run into a giant crab. As you do. Now if you’ve ever wanted to see a bunch of men fight off a giant crab with sticks, this is the film for you. They eventually succeed in tipping it over into a conveniently boiling geyser and eating it. Brilliant. At various points they also encounter a giant flightless bird and some massive bees, along with a couple of very prim, unconscious English ladies who have been shipwrecked. Apart from the volcanoes and all the crazy big animals running around, the island begins to resemble utopia, but the group are still determined to leave and make their intentions clear by building a big boat from scratch. Personally, I’d rather chill on the island with it’s plentiful supply of food and wait to be rescued than take my chances at sea with no supplies in a boat I made myself, but that’s just me.

Then things start turning weird. More weird, I mean. The group stumbles across a lovely cave and a treasure chest containing guns, maps, and other useful shit, and then they find the mother of all payloads, the Nautilus (Captain Nemo’s legendary submarine) hidden in a subterranean passage. But before they can investigate fully, they are attacked by a rogue pirate ship, which is promptly sunk in a mysterious explosion, and most bizarrely of all, Captain Nemo himself (Lom) walks out of the sea dressed up as a giant shellfish and delivers the best line of the whole film: “Contact with my own species has always disappointed me.”

Over a nice meal aboard the Nautilus, Captain Nemo reveals to the castaways that the giant creatures are the result of a series of genetic experiments designed to solve the world’s food shortages. He also claims responsibility for sinking the pirate ship, and reveals the entire island is about to be destroyed by a volcanic eruption. Bummer. But not to worry, Captain Nemo uses his ingenuity to refloat the knackered pirate ship and help the group make their getaway.

Mysterious Island is now widely known for the (then) groundbreaking stop motion animation by Ray Harryhausen, which became known as dynamation. In many ways it paved the way for other Harryhausen vehicles like Jason and the Argonauts (1963) and Clash of the Titans (1981). His first feature film, Mighty Joe Young (1949) won an Academy Award for Best Visual Effects. The scene where the Union soldiers bust out of prison and escape in a hot air balloon were filmed in Church Square, Shepperton, Surrey, while most of the indoor scenes were filmed in nearby Shepperton Studios, and the beach scenes were filmed in Castell-Platja d’Aro in Catalonia, Spain. It would perhaps be too much of a leap to say this film still stands up today, especially in the special effects department. The truth is, it’s horribly dated. But the acting is superb and as slices of nostalgia go, it doesn’t get much better than this.

Fifty minutes into the movie, Sgt Pencroft (Herbert) sings a song from Robert Louis Stevenson’s Treasure Island. However, Treasure Island wasn’t written until 1883, while the movie is set in 1865. Oops.