When people think of Welsh folk heroes, Twm Sion Cati and Owain Glyndwr invariably spring to mind, and rightly so. Not many people mention Will Cefn-Coch. In fact, I’d never heard of him myself until I recently read a book about Welsh murders. But his story is deserving of a much wider audience.

Until November 1868, plain old William Richards was an ordinary 28-year old bloke living a simple life in Cardiganshire. Times were hard in those days. There was a glaring gap between rich and poor, and lots of countryside folk took to poaching to feed their families. There simply wasn’t enough to eat, especially in winter. Although still technically a crime, most people considered sneaking onto privately-owned land to fish or hunt game a necessary evil. Except the rich landowners, obviously, who employed gamekeepers to combat the problem. These guys were not looked upon with much fondness by the locals, in much the same way I imagine Community Support Officers are these days.

One night, Will Richards (aka Will Cefn-Coch, that being the name of the village he was from) and two of his mates illegally ventured onto the estate of Trawscoed, the property of the Earl of Lisburne, to go hunting. Unbeknownst to them, gamekeepers were lying in wait. The gamekeepers, who were unarmed, tried to chase off the transgressors. The story goes that whilst running away, Will stopped and levelled his gun at them on three separate occasions. Each time, the gamekeepers begged for their lives, Will relented, ran off again, and the chase was back on. Eventually, a particularly determined gamekeeper caught up with one of the poachers and wrestled him to the ground. By this time Will had had enough, and shot the gamekeeper dead. 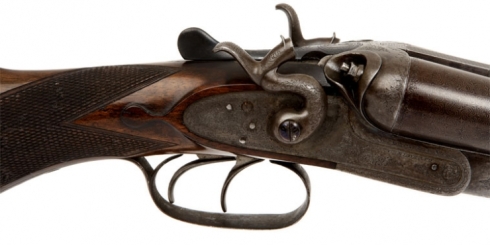 One of the poachers was apprehended and prosecuted, while Will made his getaway and melted into the community. Some sources say he was held in quite high esteem by some of the locals, who sympathised with the fact that all he had been trying to do was feed his family. There was a lot of resentment against the upper classes. The locals hid and fed him, while the authorities alerted every port and city in the country and put a £100 reward on his head (over £8,000 in ‘today’s’ money). A tidy sum, because now it wasn’t just poaching Will was guilty of, it was murder. He was on the run for months, going from house to house and farm to farm, always on the move. He had a few close shaves, but always managed to evade capture with a little help from his friends.

Eventually however, the net began closing in. If he was caught, Will knew he faced death by hanging, so drastic measures were called for. Wary of using transport he walked (yes, walked) to Liverpool, where he put the most audacious part of his plan into action. The authorities were on the lookout for a man fitting his description, so he disguised himself as a woman, complete with heavy make-up. It is likely he drew inspiration for this from the Rebecca Riots thirty years previously, when farmers dressed in drag and attacked toll gates placed on Welsh roads in protest against unfair taxation. In any case, Will must have made a convincing femme fatale, because he succeeded in boarding a ship bound for America and somehow made it all the way to Ohio, where he met and married an Irish immigrant and lived a long and prosperous life.