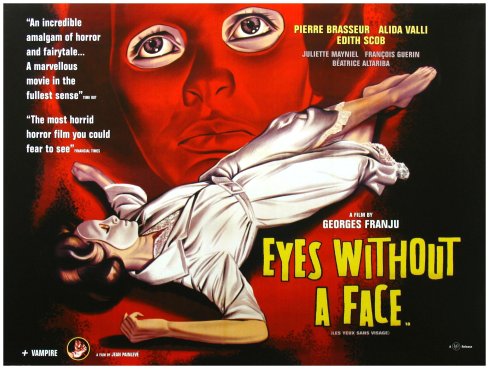 Eyes Without a Face can legitimately lay claim to being one of the first gore films ever produced. In theory, at least. During production, a lot of effort was made to satisfy the strict standards of the various European censorship committees yet despite all the restraints, it still caused quite a stir in both the snotty establishment and the cinema-going public. Initial critical reaction to such an avant garde, experimental work was mixed, to say the least. Some praised the film’s bravery and innovation, while others were simply too disgusted by some particularly grisly scenes, along with the core subject matter, to delve any further and walked off in a huff.

However, as the years passed, the film gained more and more plaudits, and these days is often cited by modern filmmakers as one of the most significant movies ever made. Its influence doesn’t stop there. In 1983, almost a quarter of a century after the film was made, English punk singer Billy Idol recorded the song Eyes Without a Face in homage to the cinematic classic. When released as a single the following year, it proved to be one of his biggest ever hits. By the way, you’ll need subtitles for this one, unless you can speak fluent French.

You know you aren’t dealing with your average piece of European cinema the moment the manic funfair music kicks in over the opening credits. Nothing slow and brooding here, which is completely at odds with the slightly disturbing visuals where we see a woman driving a dead body around in a car then dumping it in a river. Even though the corpse is disguised in a raincoat and hat, you get the sense something isn’t quite right about it. Apart from it being a corpse, obviously. And so it proves when the body apparently turns out to be the recently disappeared daughter of the renowned Doctor Genessier (Pierre Brasseur), whose face had been hideously disfigured in a car crash. So severe were her injuries that only her eyes were left intact, hence the film’s title. The doctor identifies the body and has it interred in the family crypt with that of his wife, who’d died four years previously. So far, so creepy.

The ick factor increases when the doctor and his assistant Louise (the woman who had disposed of the body) return home where the real daughter, Christiane (Edith Scob), is hidden. The body in the river was that of a test subject who had died after the doctor surgically removed her face in an effort to graft it onto his daughter. Problem is, her flesh keeps rejecting the new tissue, causing her shiny new features to literally rot away. Doctor Genessier promises he will eventually succeed, and until then urges his daughter to wear a mask. A precaution necessary because although all the mirrors have been removed from the house, Christiane still catches sight of her ruined face in shiny reflective surfaces from time to time and it never fails to freak her out.

True to his word, Doctor Genessier does indeed keep trying to restore his daughter’s face. He and Louise, who feels indebted to him for fixing her own face (one can only assume there were a lot of face accidents in post-World War II France) lure a young Swiss woman called Edna (Juliette Mayniel) to their lair, chloroform the shit out of her, then set about carving her face off and grafting it onto Christiane. This is the part that riled the censors so much, and for a film almost sixty years old, it’s pretty graphic stuff. Edna later escapes and when she discovers what they’ve done to her, throws herself out of a window, leaving the doctor and his assistant with another unsavoury mess to clean up. Meanwhile, an understandably traumatized Christiane keeps calling her fiancé, who thinks she’s dead, and a friend of Edna’s reports her disappearance to the police who see a pattern emerging. Soon, the net begins to close and as matters come to a head (or a face?) it becomes clear that Doctor Genessier isn’t the only one who can come up with dastardly plots.

Based on the novel of the same name by Jean Redon This was director Georges Franju’s (1912 – 87) first legitimate feature film. Until then he had primarily been a documentary film maker, the Nazi occupation of Paris and Industrialization featuring heavily in his subject matter. Perhaps his most controversial work was Blood of the Beasts, an unflinching look inside a French slaughterhouse. Eyes Without a Face works on many levels. Scratch beneath the surface (sic) and far from being a simple horror flick, you’ll find it rife with symbolism, offering a systematic study on the effects of guilt, remorse, unconditional love, isolation, and the misguided importance society places on superficial beauty. Unique, divisive, harrowing, and utterly brilliant.