Editor Mark Parker has done an amazing job pulling together a host of writers (Full table of contents below) who all contributed stories with the same watery theme. Actually, that’s not strictly true. The project proved so expansive that it morphed into two volumes, one based on seas and oceans and the other rivers and lakes. My own offering, about an old man sitting on his fishing boat contemplating life when things suddenly and irrevocably go sideways, was first published in the Edgar Allan Poe homage Return of the Raven back in 2009. It’s actually a lot older than that, and is probably one of the first stories I ever completed. It originally had the working title, ‘Faces in the Mist,’ and I remember spending months and months on it, making sure every word said exactly what I wanted it to say. For the longest time, I considered it one of my most accomplished efforts. But reading it now, it’s quite obviously heavily influenced by John Carpenter’s seminal film The Fog (1980) which I don’t know is a good thing or a bad thing. Anyway, Band of Souls then became an unfortunate casualty of my long sabbatical from fiction (2000 to 2008), and spent that entire time gathering virtual dust on a hard drive somewhere. 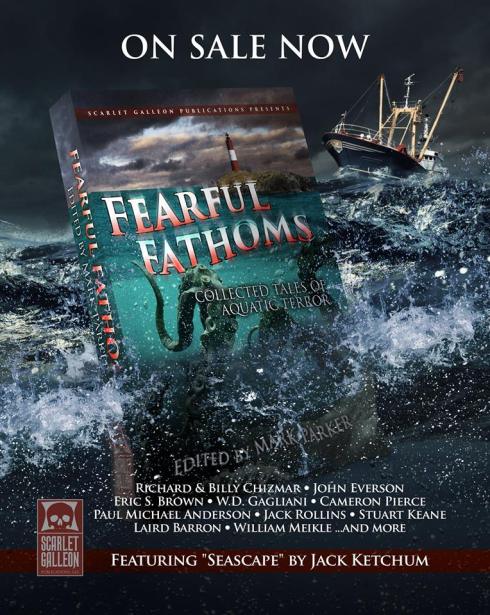 HOW DEEP DOES YOUR FEAR GO? Scarlet Galleon Publications and editor Mark Parker are here to help you find out!

Volume I of this new double-anthology features a long-unpublished story (“Seascape”) from Jack Ketchum, a landmark collaboration (“Widow’s Point”) from father-and-son writing duo, Richard Chizmar and Billy Chizmar, and many other eerie tales, accompanied by full-color illustrations by Luke Spooner.

In order of appearance, stories include:

“Widow’s Point” by Richard Chizmar & Billy Chizmar
“The Gray Man” by Mark Parker
“Fear Sun” by Laird Barron
“Carnacki: The Lusitania” by William Meikle
“Floodland” by Cameron Pierce
“Sirens” by Dallas Mullican
“Draugar” by Bryan Clark
“Old Bogey” by Lori R. Lopez
“The Lighthouse” by Annie Neugebauer
“Port of Call” by W.D. Gagliani
“Beneath the Surface” by Stuart Keane
“Once Tolled the Lutine Bell” by Jack Rollins
“She Beckons” by D.G.
“Cape Hadel” by Brad P. Christy
“Seastruck” by John Everson
“Alone on the Waves” by Eric S. Brown
“Band of Souls” by CM Saunders
“A Thousand Thick and Terrible Things” by David Mickolas
“Maelstrom” by Doug Rinaldi
“Hallowed Point” by Andrew Bell
“Wanderer” by Shane Lindemoen
“Canned Crab” by Nick Nafpliotis
“On Ullins Bank” by John Linwood Grant
“The Way We Are Lifted” by Aric Sundquist
“Surviving the River Styx” by Paul Michael Anderson
“The Water Elemental” by A.P. Sessler
“The Paper Shield” by James Lowder
“Seascape” by Jack Ketchum
“Corbett’s Cage” by Shawn P. Madison
“Jonah Inside the Whale: A Meditation” by Jason Sechrest