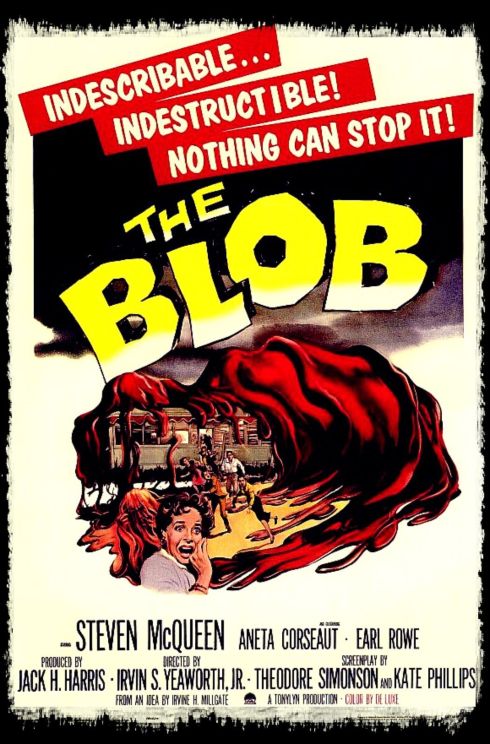 This gets off to a thoroughly bizarre start with some bouncy, sax-led dance hall number called, imaginatively enough, Beware of the Blob by a group called the Five Blobs. All five blobs in this case were actually the same person, actor and singer Bernie Knee, who had his vocals overdubbed five times. The song was written by Mack Davis and a young Burt Bacharach, who would go on to win six Grammy Awards and three Academy Awards for his music, and became a surprise Top 40 hit in America. The nature of the theme tune was an indicator that the Blob never did take itself too seriously, and it can still be found on numerous horror and Halloween-themed compilation albums.

The premise is eerily reminiscent of War of the Worlds (the 1953 original, not the later Tom Cruise vehicle) and several other period classics. A courting couple, Steve Andrews (a 28-year old Steve McQueen in his first leading role) and Jane Martin (Corsaut) are out one evening when they see a shooting star and decide to go looking for it. Instead of finding it, they stumble across an old man (Howland) who has some weird jelly-like substance attached to his hand. Good citizens as they are, the young couple take him to the local doctor (Chase). As you can probably imagine, things escalate quite quickly after that. The Blob makes short work of the poor old man, increasing in size exponentially as it does so, then moves on to the nurse, and finally the doctor himself. Steve and Jane turn up just in time to see his grisly demise. In a panic, they go to the police, who dismiss them as pranksters.

Police Sergeant: Just kids? That’s the craziest argument I ever heard. Every criminal in the world was a kid once!

Both logical, and totally brilliant.

For me, this piece of dialogue, marks an interesting shift in cultural attitudes. This was the 1958, just three years after Rebel Without a Cause came out, when the battle between teenagers and various authority figures was still raging. In this not-untypical case, the film paints the teenagers as misunderstood victims who are basically good kids who just want to help, but are not given the opportunity to do so. Instead, they are unfairly judged and demonized, an attitude which tapped into the zeitgeist of the day.

Realizing that it is down to them to save the town, Steve and Jane recruit some of their friends and go about warning everyone about the (now) massive, shapeless blobby-thing going around consuming people. When the Blob appears and ransacks a movie theatre, they are vindicated and eventually work out that the best weapon against this slimy enemy is the cold. To cut a long story short, the air force then shows up and airlifts the Blob to the frozen wastes of the arctic. As the end credits begin to roll, it is acknowledged that the creature isn’t dead but has at least been stopped, to which Steve replies, in what is obviously an early comment on global warming, “Yeah, as long as the arctic stays cold.”

In keeping with its overriding theme of teen angst (for which, you can argue, the blob itself is a handy metaphor) the movie was aimed directly at the then-lucrative drive-in market, and released as a double feature with I Married a Monster from Outer Space. It was originally the B-movie, but soon proved so popular that the slots on the bill were reversed. Since then, it has gone on to achieve cult status. A sequel, Beware the Blob (aka Son of Blob, which indicates that the original blob was somehow able to procreate) was eventually released in 1972. Directed by Larry Hagman from Dallas, it used the tagline ‘The movie JR shot.” The original was remade in 1988, and yet another remake (at one time mooted to be directed by Rob Zombie) is in the works. Most impressively of all, since the year 2000, the town of Phoenixville, Pennsylvania, where most of the movie was filmed, has hosted an annual Blobfest in homage.

Steve (for the first and only time listed in the credits as ‘Steven.’) McQueen received a flat $3,000 fee for his role, turning down an offer for a smaller up-front fee in return for a 10% percent share of profits. He thought the film would never make money, and needed money quickly to pay for food and rent. However, The Blob ended up being a huge a hit, costing only $110,000 and grossing $4 million.