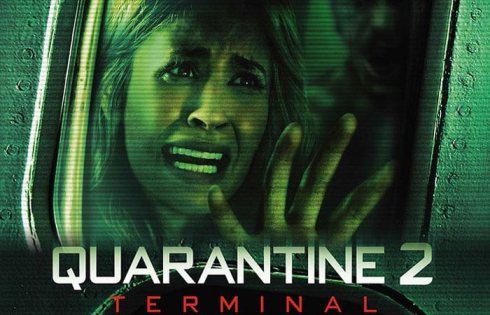 Before we start, let’s clear up the inevitable confusion. Quarantine 2: Terminal is the sequel to Quarantine, which was the 2008 English-language remake of Spanish masterpiece REC (2007). REC also had a sequel. Three sequels, in fact. REC 2 (2009), REC 3: Genesis (2012) and REC 4: Apocalypse (2014). Quarantine 2 is none of those, and follows a totally different story arc. Geddit?

Unlike any other zombie flick, Quarantine 2: Terminal, written and directed by John Pogue (who had previously picked up writing credits on Ghost Ship and the 2002 remake of Rollerball) takes place on a commercial plane and later at a quarantined airport. In fact, you could argue that it isn’t even a zombie flick. These are the Infected, rather than the walking dead brand of zombie previously encountered in movies like 28 Days Later.

It is suggested through passengers listening to news reports that the events play out concurrently as those depicted in the first Quarantine film. It starts off as a typical domestic flight. But I guess they all do, until something happens to make them less typical. Things take a sinister turn when one of the passengers, Ralph, starts frothing at the mouth, throws up all over the place, freaks out and tries to storm the cockpit. Then, in a final flourish, bites half the face off one of the flight attendants before being forcibly restrained. Definitely not what you expect or want from your in-flight entertainment. Ralph has been bitten by a hamster, which in actual fact is a disease-carrying lab rat which has been brought onto the plane by teacher Henry (Cooke) for his students.

No spoilers here, but there’s something deeply suspicious about Henry and all is revealed in due course. Disobeying orders, the pilot radios for assistance and lands the plane at the nearest airport where the passengers disembark and encounter lowly baggage-handler Ed (Serrichio) while the pilots stay on the plane to look after Ralph, who is proving to be quite a handful. As is the rat, who duly escapes the plane and proceeds to make full use of his newfound freedom. Flight attendant Jenny (Mason) bravely attempts to takes charge of the situation, but her plans spiral out of control when a bunch of military types with hazmat suits and machine guns appear, and aren’t overly friendly. They try to administer drugs to the group, which later transpire to be experimental antidotes to the rabies-like virus which is apparently being spread through bites. With Ed’s help, the survivors soon realize that the only means of escape is via an old disused tunnel. If they can find it before the infected, or the military, find them.

Quarantine 2: Terminal, apart from the genius play on words of the title, succeeds mainly because it carries over the same brand of claustrophobic terror and general believability so perfectly executed in both the original Quarantine and [REC]. Things are so tight, it could have been filmed in a cupboard. Bonus points have to go to the makers for attempting to do something different with the franchise, rather than simply taking their cues from the original REC films. Like the first Quarantine, the sequel is notable for its complete lack of musical score, which adds to the eeriness of it all.

Despite being a straight-to-DVD release by Sony Pictures, Quarantine 2: Terminal was well received by critics and at the time of writing boasts an 86% rating on Rotten Tomatoes, far above the average for this kind of film. The website Horror Freak News said in its review, “Expectations were low for this sequel to a remake, but the film pleasantly surprises. The gore is great, the characters elicit some caring about what happens to them, and the resolutions to a few lingering mysteries from REC/Quarantine are quite welcomed.”

I write stuff. Pretty much any stuff. My dark fiction has appeared in Asphalt Jungle, Raw Nerve, Roadworks, Dark Valentine, Screams of Terror, Shallow Graves, Fantastic Horror, The Literary Hatchet, Gore and numerous anthologies. My first book, Into the Dragon's Lair – A Supernatural History of Wales was published back in 2003, and I've worked extensively in the freelance journalism industry, contributing features to numerous international publications including Fortean Times, Bizarre, Urban Ink, Loaded, Record Collector, Maxim, and a regular column to the Western Mail newspaper. I lived in China for over five years where I taught English during my search for enlightenment, before moving back to the UK in January 2013 to work as staff writer on Nuts magazine. Later, I was senior writer on Forever Sports magazine and associate editor at Coach magazine, before leaving to chance my arm in the world of pro freelance. In recent times I've devoted more time to dark fiction, my latest releases being Human Waste (Deviant Dolls Publications), Tethered (Terror Tract Publishing) and X4, my fourth anthology of short fiction. I also edit, copy write, proofread and ghost write, and drink far too much craft beer. END_OF_DOCUMENT_TOKEN_TO_BE_REPLACED
This entry was posted on Friday, September 13th, 2019 at 7:48 pm and tagged with classic, films, horror, horror films, movies, Quarantine, Quarantine 2, RetView, review, zombies and posted in Films, horror, Retro Reviews (RetViews), Reviews. You can follow any responses to this entry through the RSS 2.0 feed.
« Vampires, Zombies and Ghosts, oh my!
The Bell in Dark Moments »