Where the ‘M’ Comes From

I’ve been doing this for a while now, and you may have noticed I use different names for different kinds of writing. For academic writing and more formal or serious stuff, I use my full given name. It looks more official. For sport, lifestyle and comedy writing, I use the slightly snappier moniker Chris Saunders. And for fiction, I usually use the name C.M. Saunders . There are practical reasons for doing this. I like to keep different facets of my writing career separate because it’s easier to get my head around. Besides that, the people who read my horror fiction would probably be deeply disappointed if they accidentally picked up one of my travel books, or the one I wrote about Cardiff City FC, and vice versa.

Over the years, a lot of people have asked me why I use C.M. Saunders, especially since I don’t actually have a middle name, and so no middle initial. It’s kind of a happy coincidence that my boyhood nickname was Moony. Because I have a round face, apparently. I guess it could have been a lot worse. There was a boy in my street called Dickhead. Anyway, no. That’s not where the M comes from. It’s not as straightforward as that. But there is a very good reason for it and for the first time in public, I’m going to reveal what that reason is.

It’s for my grandfather on my mother’s side. Firstly, he’s probably part of the reason I grew up to be so into the whole horror thing. He was a big reader, and would go to the local library a couple of times a week. This was back when libraries had books. Whenever I went to visit him and my grandmother in his bungalow at the top of the village when I was a kid, he would always have the latest horror novels lying on the table next to his reading chair. I was too young to read them, or even remember much, I just loved looking at those covers. Stephen King, James Herbert, Graham Masterton.

A little word about my granddad, or Pop as we called him. His name was Stanley Martin. I couldn’t get my hands on a photo of him, but here’s where he lived, New Tredegar, south Wales. This place… 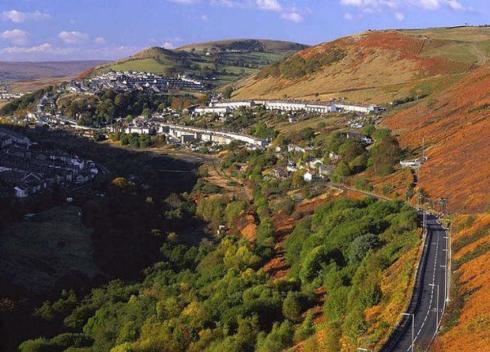 Like my other granddad on my father’s side, he was a coal miner almost all his life. Proper old school Welsh. This is Elliot’s Town colliery, where he used to work.

Being a miner was a hard life. He would delight in telling me, my sister, and cousins horror stories. Some were things that really happened to him or his friends, some were local myths or legends, and he probably made the rest up just to entertain us. The man was covered in little blue scars where coal dust had got into his cuts when he was underground, and he was still coughing up black shit twenty years after he was pensioned off. He met and married a woman called Lillian and they had three daughters, including my mother. All three daughters grew up and got married. As per tradition, when they got married they took the names of their husbands so pretty soon, the Martin name vanished. I always thought that was a bit sad, and when I started taking fiction a bit more seriously and was looking around for a pseudonym to distinguish it from my journalism, I thought using the ‘M’ initial might be a cool way to keep the name ‘Martin’ alive. He died a long time ago, and when he did his surname died with him. Now, every time I have something published under the name C.M. Saunders, it’s a silent nod to the man who introduced me to horror.

If there’s a heaven, I know he’s up there looking down with pride in his eyes.

I write stuff. Pretty much any stuff. My dark fiction has appeared in Asphalt Jungle, Raw Nerve, Roadworks, Dark Valentine, Screams of Terror, Shallow Graves, Fantastic Horror, The Literary Hatchet, Gore and numerous anthologies. My first book, Into the Dragon's Lair – A Supernatural History of Wales was published back in 2003, and I've worked extensively in the freelance journalism industry, contributing features to numerous international publications including Fortean Times, Bizarre, Urban Ink, Loaded, Record Collector, Maxim, and a regular column to the Western Mail newspaper. I lived in China for over five years where I taught English during my search for enlightenment, before moving back to the UK in January 2013 to work as staff writer on Nuts magazine. Later, I was senior writer on Forever Sports magazine and associate editor at Coach magazine, before leaving to chance my arm in the world of pro freelance. In recent times I've devoted more time to dark fiction, my latest offerings being Apartment 14F: An Oriental Ghost Story (Uncut), Human Waste and X3, my third collection. I also edit, copy write, proofread and ghost write and drink far too much craft beer. END_OF_DOCUMENT_TOKEN_TO_BE_REPLACED
This entry was posted on Thursday, March 7th, 2019 at 7:47 pm and tagged with Cardiff City, Family, fiction, Graham Masterton, horror, james herbert, new tredegar, pseudonym, Stephen King, wales, writing and posted in Blogging, dark fiction, fiction, History, Life, Wales, Writing. You can follow any responses to this entry through the RSS 2.0 feed.
« X: Omnibus is out now!
RetView #20 – Race With the Devil (1975) »

One response to “Where the ‘M’ Comes From”