Not many bands have made such a lasting impression on the musical landscape as The Clash. Even looking at their career retrospectively, it’s difficult to summarize their impact, influence and enduring legacy. Within the space of five albums spread over eight years (six if you include Cut the Crap, which most people don’t), they went from snarling punk underdogs to the ‘most important band in the world.’ Everyone has a favourite Clash album, but when pushed into a corner, most people settle on their third, London Calling, released forty years ago this week.

Following their incendiary self-titled debut and the slightly more melodic Give ‘Em Enough Rope, London Calling tried to be all things to all people. By then they were beginning to stray from their punk roots and experiment with reggae, ska, dub, soul, rockabilly and even early rap elements. There has probably never been a more diverse album. With this much going on, London Calling was in perpetual danger of becoming an indulgent, unfocused mix-tape of an album, but nothing could be further from the truth. Somehow, it comes across as a strong, cohesive, well-balanced set. Though the musical styles jump from genre to genre, the constant threads running through it all are the band’s distinctive musicianship, and insightful, socially aware lyrics tackling topics like rising unemployment, terrorism, racial conflict, the nuclear threat and political reform.

The mere act of releasing an industry-screwing double album at that point in their career was a bold move (even if, at 65 minutes, by today’s standards it would comfortably be considered a single album). Refusing to be sucked into the PR machine, even at the height of their fame the band were fiercely dedicated to giving fans VFM (Value For Money) by offering gig tickets and merchandise at reasonable prices. This philosophy extended to London Calling, and even the later triple album Sandinista! both of which retailed for the price of a single album. This meant that The Clash were in debt to CBS for most of their career. Not that they gave much of a shit. Even the cover is iconic, capturing Paul Simonon in the act of smashing up his bass at the New York palladium in frustration at the comparatively restrained crowd. 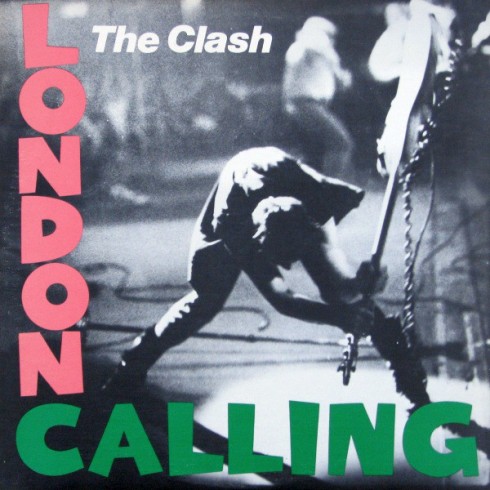 The album kicks off with the title track, which was also the lead single giving them their seventh UK Top 40 hit back when that meant something. I always thought London Calling sounded kind of ominous, that spiky guitar and low, rumbling bass reminiscent of the seminal Dead Kennedy’s Holiday in Cambodia. Always fond of throwing spanners in works, the politicised, semi-apocalyptic rant effortlessly gives way to ‘Brand New Cadillac,’ a light and jangly rockabilly cover originally written and recorded by Vince Taylor who, ironically enough, was really called Brian and came from Middlesex.  The only complaint I have about London Calling is the sequencing, which sees the rest of ‘Side One’ pass in much the same jazzy vein. It isn’t until we get to ‘Side Two’ (I’m talking vinyl here, kids) that shit gets real. Spanish Bombs, about ETA’s activities and the Spanish civil war of the 1930’s is, despite the weighty source material, one of the finest pop songs ever written. Clampdown, written in response to growing political tension in the late 70’s and Lost in the Supermarket, about, er, getting lost in a supermarket, aren’t far behind. The first record in the set closes out with the reggae-infused Guns of Brixton, written and sung by Paul Simonon, who grew up in Brixton and captures the mood perfectly.

Back to my sequencing complaint, and it has to be said Wrong ‘em Boyo (a cover of an old Rulers tune from the sixties) is completely a bizarre choice to start ‘Side Three.’ Switching that with Clampdown would have made much more sense, in almost every way. Happily, things get back on track pretty soon with a pair of underrated classics Death or Glory (later covered by Social Distortion) and the lyric-heavy Koka Kola, a cynical take on advertising and corporate shenanigans. The next few tracks are noticeably more restrained, featuring doo-wap and jazz influences and even some (apparent) improv, the pick of which being The Card Cheat. In later interviews, Strummer said he wrote the song after reading a lot of Sylvia Plath, which perhaps explains why the lyrics are so dark and mournful.

The Four Horsemen is a bit more direct and punk-sounding, and could easily have landed on the previous album. The same can be said of I’m not Down, a supposedly semi-autobiographical Mick Jones composition outlining his struggles with depression. If you have to tell yourself you’re not down, you probably are. The last track, Train in Vain, is another interesting one. It was a late addition to the album, having originally been intended as a free flexi-disc giveaway with the music bible NME, but when the deal fell through the band decided it was just too good to shelve. And they were right. It’s like the final piece of the jigsaw, coming right after Revolution Rock, ensuring the album ends on an uplifting note.

London Calling is very much a London album. Just like the city it is complex, wide-ranging and diverse, fiercely proud, defiant and filled with hope and optimism. It is rooted in the past, but has its eyes fixed firmly on the future comprising of a million different, sometimes competing elements, all of which come together to form something unique. It is worth noting that most of the tracks on London Calling were recorded in just one or two takes at Wessex Sound Studios by producer Guy Stevens, a notorious hell raiser who would be dead in less than two years at the age of 38. Ironically, the cause of death was an overdose of prescription drugs he was taking to combat alcohol dependency. He has consistently been credited as a key factor in London Calling’s quality and popularity, which as seen it become widely acknowledged as one of the best albums ever made.  Joe Strummer copped a lot of flak for being born middle class, but there was nothing contrived about his music, least of all London Calling. Listening to the album now, four decades later, it’s like going on a journey. Everything came together at the right time – the song writing, the energy, the creativity, the ambition and a relentless desire to make their mark. Something they certainly achieved.